He Drew Me Back 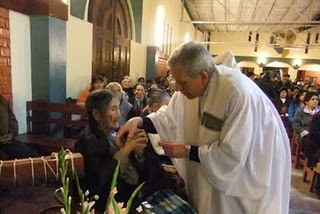 Though it may seem strange, you could say I got here by way of the road to Emmaus. Let me explain. During our Holy Cross candidate year at Notre Dame, we meet many Holy Cross missionaries who were invited to speak to us during their home leaves. One such was Fr. Miguel, who was back from Chile, inseparable from his guitar and eager to share with us the melodies of the liturgical folk music popular in Chile. We were fascinated!

One of the most memorable songs he taught us begins with the refrain “En la calzada de Emaús” (on the road to Emmaus), and sets to music the well-known Lucan post-resurrection narrative. Consciously or not, from that point on I was being drawn into the very scene the song retells.

Just before professing final vows I spent a summer in a wintery Santiago, up against the foothills of the snow-capped Andes, in the midst of some of the people most affected by a brutal dictatorship. Later I returned as a priest and stayed for 19 years, until I was invited to work here not so long ago.

I’ve probably done a lot more walking down here than during all my years in the States. A lot of it has been the kind of walking the two disciples did as they got to know the alluring Stranger on the road to Emmaus. Our Constitutions begin with walking: “There seemed to come a time when the Lord was calling us to take some further step … we found many footprints on the road. A great band of men had passed this way… men who had walked side by side in their following of the Lord, and beckoned us to fall in step with them.”

You never know what will happen when you try to follow the Lord or when He catches up to fall in step with you; but it’s inevitably surprising.

In the gospel story that is sung in “La calzada de Emaús”, it’s the risen Lord who falls into step with the disciples. They are already walking immersed in their thoughts, when He, perhaps breathless, catches up with them. They didn’t ask Him to join them; they weren’t sure who He was. Nonetheless, He was drawn to them as later they would be completely drawn to Him; and even more, having walked some time with Him they “pressed” Him to stay.

I have to confess that once the novelty wore off and after a couple of weeks into my first visit to Chile, I began counting the days until I would be back on safe turf. It was an interesting adventure; I surprised myself by having done it; and that’s where it would end. But it didn’t! The one who had caught up and fell in step had drawn me irresistibly back, and I’ve pressed Him to stay.

On the road to Emmaus
A pilgrim came walking with me;
I didn’t recognize him as we walked
But now I do, in the breaking of bread.

Revealing God's Truth and Love in the Classroom