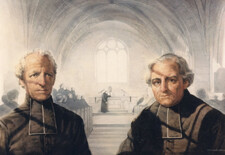 Fr. Jacques-François Dujarié was a key figure in the foundation of the Congregation of Holy Cross, a man whose heroic determination to serve the material and spiritual needs of the poor in France helped to lay the groundwork for the mission of Holy Cross throughout the world.

Fr. Dujarié was born in France on December 9, 1767. He was secretly ordained as a priest in Paris on December 26, 1795 during the height of the French Revolution, which had largely dismantled the Church. During this time, Church property was being seized, priests were being arrested and executed, and religious communities were being expelled from France. Beginning in 1789, the parishes, convents and monasteries that had provided most of the country’s education and health care were closed and their assets seized. During the first waves of the revolution priests and religious who did not desert the church were imprisoned, deported, executed or forced into hiding.

Dujarié celebrated his first Mass in the middle of the night in a barn outside of Ruillé-sur-Loir. He would celebrate many Masses this way, forced by the Revolution to become an “underground priest.” From his place of hiding, Dujarié zealously served underground at night. At times he even posed as a peddler to go out through the countryside tending the people. Both the faithful and he lived at great risk in doing so. Severe punishment awaited the person caught hiding a priest or receiving the sacraments.

In 1801, an agreement between Napoleon and Rome resulted in the slow reemergence of religious institutions to France, and Fr. Dujarié became pastor of Ruillé-sur-Loir in 1803. The Church faced the daunting task of rebuilding from the aftermath of the Revolution, and Fr. Dujarié assembled a group of young women to teach the young in a nearby village. These women became the Sisters of Providence, and they were established as their own order in 1831.

A few years later, the clergy of the Diocese of LeMans asked Fr. Dujarié to assemble a group of teaching brothers to serve parishes in the diocese, and he founded the Brothers of St. Joseph in 1820. The brothers grew quickly as many pastors sought their assistance.

Fr. Dujarié realized that this fast-growing group of brothers was still tenuous, and he sought to assemble a group of diocesan priests to work with the brothers and give cohesion to this structure. By this time, Fr. Dujarié’s health was failing, and so he selected Fr. Basil Moreau to continue his work. Fr. Moreau moved the brothers to LeMans in 1835, and two years later the Brothers of St. Joseph were formally united with Fr. Moreau’s group of auxiliary priests in the Fundamental Act of Union, thus creating the Congregation of Holy Cross.

At the invitation of Fr. Moreau, Dujarié lived the last years of his life until his death on February 17, 1838, at Sainte-Croix. At first, Fr. Dujarié was buried in Le Mans, but later the Sisters of Providence requested that his remains be transferred to their motherhouse chapel in Ruillé-sur-Loir.