Let Us Also Go to Die With Him

Let Us Also Go to Die With Him These are St. Thomas’ words from this past Sunday’s Gospel, just before Jesus heads to Bethany to console Martha and Mary, and bring their brother Lazarus back from the tomb. The other disciples knew that going back towards Jerusalem, back toward the authorities who were scheming against Jesus, would put Jesus and His ministry—as they knew it—at risk.  They thought that Jesus’ arrest would derail the Kingdom Jesus had been preaching—they feared that their plans would be ruined if Jesus’ increasing fame and influence were interrupted. Isn’t this the best way to “get the message out,” to keep preaching?

Thomas knew that going back towards Jerusalem might mean mortal danger for his Master, but he was filled with courage that day—more courage, it seems, than he had on Good Friday, when only John remains from among the Twelve, along with the faithful women and the Blessed Mother. Even though Thomas’ nerve failed (as did Peter’s), we shouldn’t belittle the courage he did have—it is praiseworthy even if it wasn’t constant.  Thomas wanted to “do the right thing” even if he, temporarily, failed to always live up to it. He would still go to lay down his life for the Gospel, years later, in India.

Those of us who desire to discern God’s will in our lives can pray to St. Thomas for the courage that flashed on that day in the Gospel, but even more importantly, for that courage that came to full flower in his missionary work.  Following God’s call for your life, no matter which vocations He calls you to, will involve dying to self, dying to selfishness, and most of all, dying to my own idea of what my future will look like. To find heavenly joy almost inevitably entails forgoing some temporary earthly happiness. But joy is more satisfying.

Contrast Thomas’ “let us go to die with him,” with Peter’s awkward rebuke of Jesus’ prediction of his Passion elsewhere; Jesus strongly corrects him, “Get behind Me! You are not thinking as God does.” Peter had an idea of what the future would look like—it was still based on Jesus, but it wasn’t God’s will for our salvation—so however good-intentioned Peter’s plan was, it was not based on the will of God.

Soon we will follow the Church into Holy Week and the Sacred Triduum, and we will accompany, spiritually, our Lord as He goes to do his Father’s will. For a while it seems as though everything has gone wrong, that Jesus has been abandoned. But He is never separated from His Father. Jesus is going to open the gates of Heaven for us, let us also go to die with Him. 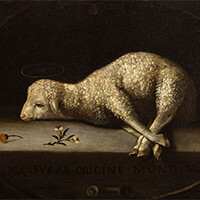 So He came, the long-expected,

Not in glory, not to reign;

Only born to be rejected,

Till the scaffold was erected

And the Paschal Lamb was slain.

Excerpt from a Good Friday hymn from the Roman Missal

Enter your email address to receive our monthly discernment e-newsletter.

For Those Who've Gone Before Us