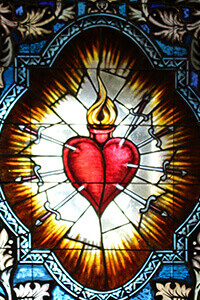 When the Blessed Virgin said “yes,” to the invitation of the Angel Gabriel, her great “Fiat,” we can wonder how well she could have understood the suffering that her answer would entail.  The Prophet Simeon confirmed this for her when he predicted that “a sword of sorrow shall pierce your heart.” The most popular images of Our Lady’s Heart, the Immaculate Heart and the Sorrowful Heart, or “Seven Dolors,” both show one or seven swords piercing Mary’s pure Heart.  Why do we focus on such a painful moment in Mary’s life, why do we remember her Sorrows every September? Shouldn’t we focus instead on her joys and triumphs? And why did Bl. Basil Moreau choose Our Lady of Sorrows, of all Marian titles, as the principal Feast Day of his Congregation?

Some Christians, especially those not from a more traditional background, sometimes struggle with the “hard images” that the Church focuses on from time to time. It is fair to ask why one of the central images, critical for liturgy, of any Catholic church or chapel is a Crucifix.  Why is the Crucifix, with the dead or suffering Lord, placed there instead of, say, the empty tomb with the stone rolled back? Why the Crucifix with a weeping Mother and one lone, beloved Apostle, instead of the Risen Lord?

This mystery lay at the center of Moreau’s vision for Holy Cross, and indeed of his own spiritual life. He had known suffering in his life—he struggled with pain and illness regularly—in his leadership of the community—squabbles, financial crises, and most of all the untimely deaths of members—and certainly his beloved France had known untold suffering during and after the Revolution. Can anything make sense of all this suffering? How can we come to say “The Cross is our Hope,” instead of “Life is meaningless pain, and then we are gone?”

Moreau knew, and certainly the Blessed Mother knew, that life will contain suffering whether you follow the Lord or not. It is not that God will spare his faithful from suffering, but that in the Incarnation Jesus gives that suffering meaning because He can conquer it in the same event in which He conquered his own Death. In the Paschal Mystery Jesus transformed suffering and death from being the torment and end of life into the gateway of eternal life—death has lost its sting. The second Preface of Holy Martyrs says, “[The martyrs’] very sufferings are but wonders of your might.” Martyrs are not pictured holding the instruments of their deaths primarily to show their terror; they hold them as trophies. Some martyrs hold the instruments that killed them, some hold crowns or palms of victory—the Resurrection makes them basically the same things.

In her most dreadful, unspeakable agony, at the foot of the Cross as her only Son suffered and died, Mary stayed faithful. She believed that God’s promises to her would be fulfilled, even though at that moment it looked as if everything had been taken away from her. She renewed her “yes” at the Cross, and continued to hope in her Son. Therefore her tears are more precious than diamonds, her fidelity in suffering is a mighty work of God’s love, deserving praise as much as any great miracle.

From her throne in Heaven she can point us to the Cross and say, “see where God’s greatest work was done in my life? It was just when things looked worst for me, when the sword pierced me the deepest. By His grace, it can be so for you as well.” Hail the Cross, It is our Only Hope!

on the road to Calvary your eyes of compassion

lovingly looked upon your Son.

Turn your gentle gaze upon those contemplating

May they be inspired by the example and witness

of a "great band of men" in Holy Cross

who walk side by side in their following of the

Taken from the Directory of Devotional Prayer,

For Those Who've Gone Before Us