If you are in the South Bend, Indiana, area, or reside on the campus of the University of Notre Dame, please scroll down to meet the vocations staff at Moreau Seminary. If you have questions about discernment with Holy Cross, please contact us. We're happy to help.

Or, if you are on one of our four college or university campuses, please use these buttons to find a vocations director near you! 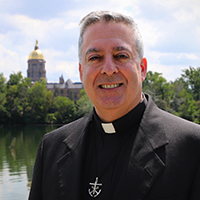 Fr. John DeRiso, C.S.C., is Director of the Office of Vocations for the United States Province of the Congregation of Holy Cross. He resides in Morrissey Hall on the campus of the University of Notre Dame, presiding at Mass and serving as a pastoral presence for the men of the residence hall. Fr. John formerly served as rector of the Shrine of Blessed Basil Moreau and as pastor of the parish of Notre-Dame de Sainte-Croix (Le Mans, France). He has also served as pastor of Saint Joseph Parish (South Bend, IN) and as parochial vicar at Saint John Vianney Parish (Goodyear, AZ). Fr. John received his B.A. and his M.Div. from the University of Notre Dame. He professed his Final Vows in September of 2001 and was ordained a priest in April of 2002. 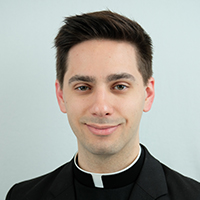 Fr. Dennis grew up in Rochester Hills, Michigan, and came to the Congregation of Holy Cross after earning his bachelor's degree in music from Oakland University. During his time in formation, he developed a love for sacramental and liturgical theology and enjoyed a number of ministry assignments in Latin America that greatly impacted his relationship with God and his desire to minister as a religious priest. Fr. Dennis comes to the Office of Vocations after four years serving as the parochial vicar of St. Ignatius Martyr Catholic Church in Austin, Texas.

Fr. Dennis graduated with his M.Div from the University of Notre Dame in May of 2015. He professed perpetual vows in the Congregation of Holy Cross on August 29, 2015, and was ordained a priest on April 2, 2016, at the Basilica of the Sacred Heart in Notre Dame, Indiana.

He is the priest-in-residence at Notre Dame in Knott Hall. 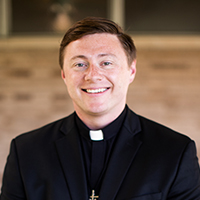 Fr. Brendan McAleer is the fifth of ten children.  Born and raised outside of Chicago, he first met the Congregation of Holy Cross while attending Notre Dame high school in Niles, IL.  Fr. Brendan went on to pursue his BA at Holy Cross College, and it was during this time that he entered the Old College Undergraduate seminary at the University of Notre Dame.  He received his MDiv from the University of Notre Dame in 2018.  On April 7th of that same year, Fr. Brendan was ordained a priest at the Basilica of the Sacred Heart.  Before joining the Vocations team, he ministered as an Associate Campus Minister at King’s College in Wilkes-Barre, PA.