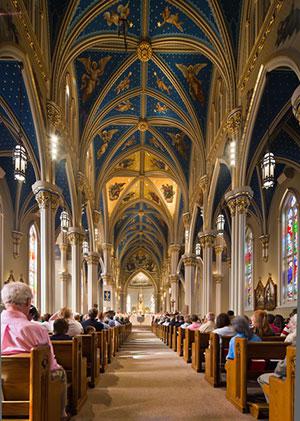 The University of Notre Dame's Basilica of the Sacred Heart will be closed from Dec. 26 (Thursday) through Jan. 17 (Friday) for renovations.

According to Basilica rector Rev. Peter Rocca, C.S.C., the project will include the removal of carpeting and the installation of slate tile flooring.

"Since the renovation of the then Sacred Heart Church following the Second Vatican Council, and its subsequent restoration in the early 1990s, the floor of the Basilica has been carpeted," Father Rocca said. "Originally, however, the floor of the Basilica was tile, which provided for a more resonant space, especially for singing and the performance of organ and choral pieces. The removal of the carpeting will enhance the acoustics in the Basilica and eliminate the need of replacing the carpeting every 10 to 15 years."

Fr. Rocca said that the Basilica will be open for the Vigil Mass at 5 p.m. Jan. 18 (Saturday).

A schedule of liturgies to be held in the Basilica's Sacred Heart Parish Crypt during the closing may be found online at campusministry.nd.edu.

Originally published by Michael O. Garvey at news.nd.edu on December 16, 2013.