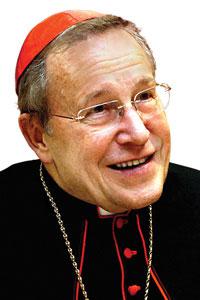 His Eminence Cardinal Walter Kasper, president emeritus of the Pontifical Council for Promoting Christian Unity, will deliver the 2013 Terrence R. Keeley Vatican Lecture at 5 p.m. April 24 (Wednesday) in the Carey Auditorium in the Hesburgh Library at the University of Notre Dame.

Pope Francis specifically commended the theological work of Cardinal Kasper at his first Angelus message, noting that, "(i)n these days, I have been able to read a book by a cardinal -- Cardinal Kasper, a talented theologian, a good theologian -- on mercy. And it did me such good, that book."

Sponsored by the Nanovic Institute for European Studies, Cardinal Kasper will address "The Origins of Vatican II." This lecture is free and open to the public. Cardinal Kasper will also participate in an international gathering of scholars, "The Theology of Cardinal Walter Kasper: A Celebration of his Life and Work," which will take place at the Notre Dame Conference Center on April 25-27 (Thursday-Saturday).

More information on Cardinal Kasper's visit and an archive of past lectures are available at nanovic.nd.edu.