Fr. Looney is Director of Campus Ministry at King's College

Fr. Looney is Director of Campus Ministry at King's College 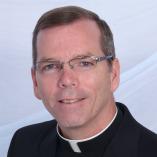 Rev. Thomas Looney, C.S.C., has taken over as director of Campus Ministry and College Chaplain at King's College, an educational apostolate of the Congregation of Holy Cross, United States Province of Priests and Brothers.

Fr. Looney will be primarily responsible for overseeing the spiritual needs of the campus community, including the celebration of Sunday and weekday mass, sacramental preparation, and faith formation programs.

He will also supervise the College's Shoval Center. The center, directed by Bill Bolan, coordinates local, national and international volunteer initiatives for both students and King's staff. The Shoval Center has been recognized nationally for its superior work.

Fr. Looney previously served as Assistant Provincial of the U.S. Province and Provincial Superior of the former Eastern Province of Priests and Brothers of the Congregation of Holy Cross. As part of his provincial duties, he served on the King's Board of Directors.

Fr. Looney was Associate Vice President and Dean of Faculty, an AssociatePprofessor of Systematic Theology and Chair of the Theology Department at King's.

Since leaving King's in 2007, Fr. Looney also served as Vice President for Mission at Stonehill College, overseeing Campus Ministry, Volunteer Services and the Center for Nonprofit Management. In addition, he worked to strengthen Stonehill's Catholic identity and mission.

A student and scholar of Blessed Basil Moreau (1799-1873), he serves on the Religious Life and Vocation Committee for the Congregation of Holy Cross. He is a popular homilist and retreat director, giving missions in parishes and retreats to members of religious congregations.

Fr. Looney serves on the Board of Trustees of Stonehill College, Renew International and the Father Patrick Peyton Centre in Ireland. His publications have appeared in "One in Christ," "Ecumenical Trends," "Review for Religious" and "Pastoral Life."

Fr. Looney earned a bachelor's degree from Stonehill and a Master of Divinity from the University of Saint Michael's College (University of Toronto). Ordained to the priesthood in 1987, he was awarded a Doctorate in Systematic Theology from The Catholic University of America.