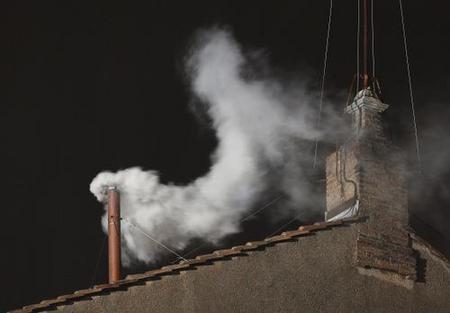 As the white smoke started billowing out of the chimney and the bells began to ring out across Rome, people immediately started flooding into St. Peter's Square from all over. They streamed through the Bernini columns so that massive square filled quickly. It reminded me of the vision of the prophet Isaiah (2:2):

In days to come,
The mountain of the LORD's house
shall be established as the highest mountain
and raised above the hills.
All nations shall stream toward it.

If we listened this week to the media, we may have gotten the impression that this rush of people was like the rush of any typical election night. We were all streaming into St. Peter's Square to see and hear if "our guy" had been elected. 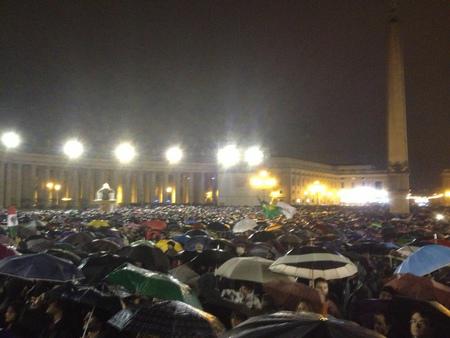 And yet, as the tape clearly shows, the celebration started long before any of us knew who had been elected pope. As soon as everyone realized that the smoke was white, joy - pure joy - seized the crowd. People were cheering, high fiving, hugging, shaking their umbrellas, jumping up and down, dancing - really anything they could do to let out the joy that was welling up inside of them.

And even though we ended up waiting over an hour to hear the Cardinal Protodeacon say, "Annuntio vobis gaudium magnum: Habemus Papam," we spent very little of that time - at least in St. Peter's Square - speculating about who the new pope was. The phrase that just kept being said again and again and again - as if the reality would finally sink in fully - was: "We have a pope!"

That response of the mass of people in St. Peter's Square made me realize that the real election today was not the election of the new pope. (By the way, in case you missed that little detail, Jorge Cardinal Bergoglio is now Pope Francis.)

The real election yesterday was the election of us, of you and I! Last evening, God continued His election of us as His people, as His beloved sons and daughters. We were the ones whom He elected!

In giving us a new pope, whoever he was, God has continued fulfilling His promise never to abandon us, never to leave us without a shepherd. Yes, it is God who ultimately shepherds us and guides His flock, as Benedict XVI so beautifully and powerfully reminded us through his resignation and his final weeks in office. But, the pope as the Pastor of the Universal Church is the loving sacrament, the loving reminder of that greater reality that God is the One who guides and shepherds His people. 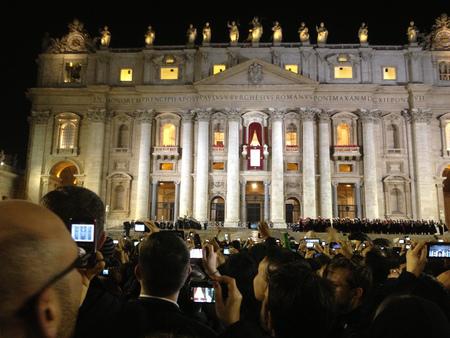 That is why, I believe now, we all rushed to St. Peter's Square; that is why we all started cheering long, long before the name of the new Pope had been announced. We were besieged by joy and gratitude because we knew that once again, God had chosen us! Yes, God, it is true: It is not we who chose you, but you who chose us (cf John 15:16).

Yet, in the vision of the prophet Isaiah, it is not simply the Jewish people who are streaming to the mountain of the Lord's house, but "all the nations." And that has certainly been true these past few weeks here at St. Peter's Square as I have run into many non-Catholics. In fact, I even ran into two Mormon missionaries who rushed to the Square, wanting to be present.

And the non-Catholics with whom I had the chance to talk spoke in that way. They might not agree with the Church on all her teaching; they might not be looking to sign up to become Catholics tomorrow; but they were people looking for light to illumine their paths in this world; they were people seeking a salt to flavor their lives on this earth. And they had a sense that in this Square they might begin to find it. 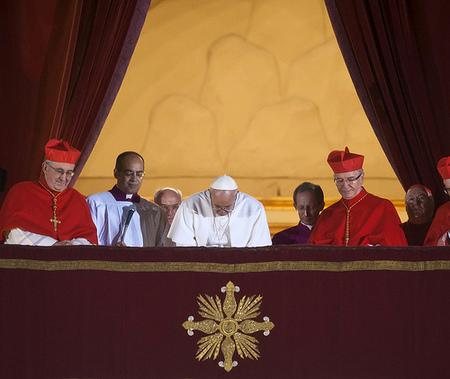 And so, let us continue to pray for our new Holy Father, Pope Francis. May God shepherd and guides us through him so that the rest of the prophet Isaiah's vision may be fulfilled (2:3-5):

Many peoples shall come and say:

"Come, let us go up to the LORD's mountain,
to the house of the God of Jacob,
That he may instruct us in his ways,
and we may walk in his paths."
For from Zion shall go forth instruction,
and the word of the LORDfrom Jerusalem.
He shall judge between the nations,
and set terms for many peoples.
They shall beat their swords into plowshares
and their spears into pruning hooks;
One nation shall not raise the sword against another,
nor shall they train for war again.
House of Jacob, come,
let us walk in the light of the LORD!

Fr. Andrew Gawrych, C.S.C., is the Associate Director of the Office of Vocations for the United States Province of the Congregation of Holy Cross. He is currently in Rome on special assignment. You can read more Holy Cross blogs on the Spes Unica Blog: