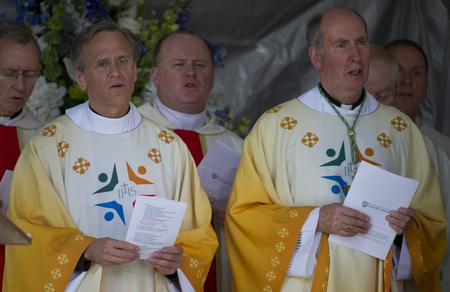 The Congregation of Holy Cross, while founded by Blessed Basil Moreau in Le Mans, France, in 1835, took on Irish roots as well when Fr. Moreau sent Fr. Edward Sorin to the United States in 1842.

Four of the seven brothers who helped Fr. Sorin establish the University of Notre Dame in the New World were from Ireland. That Irish heritage was celebrated during the recent trip to Ireland by Notre Dame students, faculty, staff and fans for the ND/Navy football game.

A 50-minute video that includes the Sept. 1 Thanksgiving Mass in the courtyard of Dublin Castle contains an introduction by Professor Kevin Whelan of ND's Keough Naugton Center in Dublin, Rev. Sean McGraw, C.S.C., and Rev. John Jenkins, President of the University of Notre Dame.

The three discuss ND's Irish history and its deep-rooted connection with the Irish people. Fr. Jenkins noted that 14 of the 16 presidents of Notre Dame - all of whom have been Congregation of Holy Cross priests - were of Irish decent. The video was broadcast on Irish television.

Co-celebrants of the Mass included Fr. Jenkins, the Apostolic Nuncio Archbishop Charles Brown, a 1981 alumnus of Notre Dame, and Superior General of the Congregation of the Holy Cross, Rev. Richard Warner, C.S.C. The Mass was attended by about 5,000 Americans visiting for the football game.

The video will be available online until Sept. 23.