An award is being established to honor Rev.Patrick J. Sullivan, C.S.C., a community Leader for the working Family, professor of sociology, and former Kings College Sociology Department Chairman during the 1960's.

Known affectionately as "Sully" by those he mentored and supervised at the college's Hafey-Marian Hall, Fr. Sullivan combined fairness and compassion with discipline when dealing with those in his charge.

The award named in his honor was established through the efforts of former King's football players - many of whom lived at Hafey-Marian Hall during Father Sullivan's tenure. The Rev. Patrick J. Sullivan, C.S.C. Award will be presented to a member of the football team who not only has a strong moral compass and demonstrates hard work, discipline, and leadership as a member of the King's College football team, but also reflects the stated values of the greater King's College/Holy Cross community. Recipients will be selected with thehope of being an example for all tofollow, and a willingness toassist in developing a worthy recipient for each successive year. With input of teammates, coaches, and the athletic department, King's College will make the final selection.

When founded, a majorpart of the King's College mission was to educatethe children of miners who worked in the coalfields of Pennsylvania. No one individual personified that mission more than Fr. Patrick Sullivan, C.S.C. Father Sullivan was an essential Leader in the development and growth of the greater Kings College community - championing the cause of hard-working men and women and fighting for fair treatment of working families. 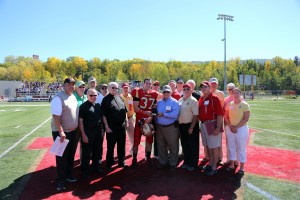