New Rec Center at the University of Portland to be Named for Fr. Beauchamp

New Rec Center at the University of Portland to be Named for Fr. Beauchamp 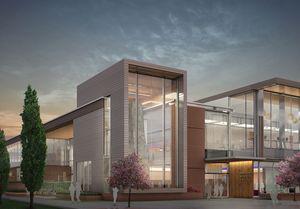 A new recreation and wellness center, set to break ground in May 2014, will be named in recognition of University of Portland President Rev. E. William Beauchamp, C.S.C.

The announcement was made during the University's annual Christmas gala on Friday.

Earlier this year, Fr. Beauchamp announced he is stepping down as president at the end of the 2013-14 academic year. The University's president since 2003, he has been a strong supporter of the new center, expected to be completed by May 2015. The Beauchamp Center will be located on what is now a parking lot at the corner of North Portsmouth and Strong avenues.

The Beauchamp Recreation & Wellness Center is estimated to cost $23 million, with $20 million raised as of today. The building is expected to become a dynamic focal point on campus and enhance the physical and mental health of students, faculty and staff. Designs call for a new, modern facility, which will feature state-of-the-art equipment and space to accommodate the growing University community.

Gifts made to the Beauchamp Recreation & Wellness Center are included in the University's RISE Campaign, which was announced in December 2010 and seeks to raise $175 million by 2014. The RISE Campaign, which has raised more than $165 million to date, is one of the largest development campaigns ever for a Pacific Northwest private college or university.

The San Francisco office of 360 Architecture and Portland-based Soderstrom Architects are finalizing the design of the building. Renderings of the proposed building can be found here.

"I am moved and delighted that our long-awaited and desperately needed recreation and wellness center, the final structure to be built during our Rise Campaign, will be named in my honor," said Fr. Beauchamp. "I'm so grateful to those who have been so incredibly generous with a space so devoted to our students' health and well-being. Our greatest treasures on The Bluff, the whole point of our mission and creative drive, are to help students discover and shape their God-given gifts and talents. I am absolutely humbled by this gesture. To have my name associated forevermore with our students' joy and health - that is a gift beyond measure."

Proposed rooms for the building include the fitness center with cardio machines, strength and free-weight stations and areas for health and wellness testing and counseling. The gymnasium will include three courts for basketball, volleybal, and floor hockey. An indoor track will be suspended above the gym and will hold three lanes for walking and jogging, as well as pace clocks and stretching areas. The new Beauchamp Recreation & Wellness Center will also have two exercise studios, a spinning studio, an Outdoor Pursuits Center and a 32-foot rock-climbing wall.

The University has risen to remarkable heights since Beauchamp became president in 2003. The many accomplishments over the past 10 years include: