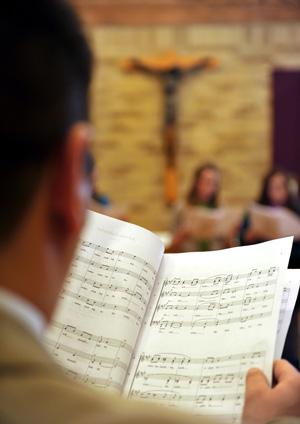 "From the very beginning, liturgy and music have been quite closely related," said Cardinal Joseph Ratzinger. "Mere words do not suffice when man praises God. Discourse with God goes beyond the boundaries of human speech. Hence by its very nature the liturgy has everywhere called upon the help of music, of singing, and of the voices of creation in the sounds of instruments. The praise of God, after all, does not involve only man. To worship God means to join in that of which all creatures speak."

That was some 30 years ago, as the future Pope Benedict XVI addressed a conference of musicians gathered in Rome, but he may as well have been addressing the more than 100 musicians gathered last week on the campus of the University of Notre Dame for its inaugural Sacred Music Conference.

The conference, titled "James MacMillan and the Musical Modes of Mary and the Cross," was organized by Margot Fassler, Keough-Hesburgh Professor of Music History and Liturgy; and Carmen-Helena Tellez, professor of music at Notre Dame, to coincide with the celebration of the feast of Our Lady of Sorrows, the patronal feast and 175th anniversary of the founding of the Congregation of Holy Cross.

Composers, conductors and scholars of sacred music came together to discuss, share and perform their work. Among them were the Scottish composer and conductor MacMillan, the former conductor of the BBC Philharmonic Orchestra who had composed the music for Pope Benedict's 2010 visit to England.

Complementing the conference's academic and specialized panels and workshops on the composition, analysis and conducting of sacred music, several public events accessible to all music lovers were offered. Among these were a Thursday evening Vespers service in the Basilica of the Sacred Heart that included the voices of the South Bend Chamber Singers performing MacMillan's "Magnificat"; a Friday night Sacred Chamber Recital with Notre Dame music faculty organists Craig Cramer and Paul Walker and baritone Stephen Lancaster in the Reyes Choral and Organ Hall of the DeBartolo Performing Arts Center; a performance of Renaissance music for the feast of the Seven Sorrows of the Blessed Virgin Mary given by Pomerium, the New York-based a capella ensemble; and the world premiere of MacMillan's "Cum Vidisset Jesus," a commissioned motet dedicated to the Sisters of the Holy Cross, followed by his cantata "The Seven Last Words from the Cross," performed by Aguava New Music Studio and the Notre Dame Festival Chorus and Orchestra under the direction of Tellez in the Leighton Concert Hall.

"I am still basking in the afterglow of the conference," said Rev. Michael Driscoll, associate professor of theology and co-director of Notre Dame's Master in Sacred Music program. "It was truly a life-changing event. You could really feel the Spirit moving. But the final concert on Saturday was nothing short of bliss. I felt myself brimming over during the event -- particularly during movement three of the Seven Last Words. It is nothing short of genius how MacMillan can take well-known liturgical texts, such as the 'Ecce Lignum Crucis' of Good Friday, and breathe new depths of meaning into them. In light of the loss of both my parents this past year, this work brought me personally great consolation. The experience of how the sacred arts impart that deep-felt knowledge of head and heart and faith, the knowledge that nurtures whole human persons and inspires a knowing from the inside out truly came home to me once again."

Originally published by Michael O. Garvey at newsinfo.nd.edu on September 20, 2012.