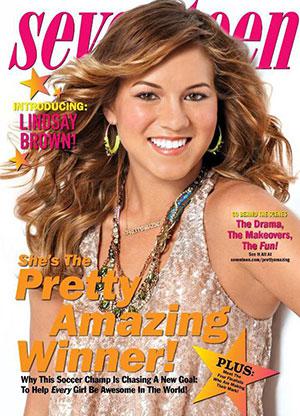 Brown was recognized for her service work with girls in Nepal and other countries, her involvement in the nonprofit organization "She's the First," and the creation of her own nonprofit project. As the contest winner, Brown received a $20,000 scholarship and will be featured on the cover of the October issue of Seventeen.

A former Notre Dame soccer player, Brown was selected from among 35,000 nominees ages 15-22 by a combination of readers' votes and a panel of judges, including Seventeen Editor-in-Chief Ann Shoket, actress Emma Roberts and celebrity blogger Jared Eng. (Watch a video of Brown finding out from her Notre Dame team that she had won.)

"I was just in shock at first," Brown told the Orange County Register about learning she had won. "When I thought about my girls in Nepal, Cambodia and Kenya, the shock turned into exhilaration. Thirteen million girls are going to see this magazine."

With the full support of Coach Randy Waldrum and her teammates, Brown voluntarily left the soccer team last year so she could focus her extracurricular attention entirely on helping those less fortunate after returning from an internship in Nepal, where she taught at Kopila Valley Primary School and formed the school's first girls' soccer team.

Brown has also worked the past three years with She's the First, which supports the tuition and education of girls in the developing world. In fall 2010, Brown and her teammates, who went on to win the NCAA national championship that year, sold tie-dye cupcakes at a campus bake sale and raised enough money to sponsor three girls at Kopila Valley.

The next fall Brown shared her cupcake recipe with high schools and colleges around the country through the She's the First website, starting a movement of more than 100 schools in 35 states for a national tie-dye cupcake sale that November. Brown and She's the First raised more than $22,000, enough to sponsor the education of 48 girls at Kopila Valley.

After leaving the soccer team, Brown co-founded S.E.G.W.A.Y., which stands for Soccer Empowering Girls Worldwide and You. The project aims to connect female soccer athletes in the U.S. with girls in third world countries to empower them through soccer, and also sponsors soccer programs in Nepal and Cambodia.

Brown said she entered the contest to put girls in Nepal and other countries on the radar for American girls and is excited that her achievements will reflect the education she has received at Notre Dame.

"I really don't think this cupcake sale and campaign would have been as successful at another university, because the Notre Dame community understands the value of helping others," Brown told the Observer. "When I saw the reality that girls still don't go to school and it's taboo for them to play soccer, I wasn't OK with that. Notre Dame gave me the tools to change it."

Originally published by Claire Stephens at newsinfo.nd.edu on September 10, 2012.