Sustainability is a Spiritual Issue

Sustainability is a Spiritual Issue 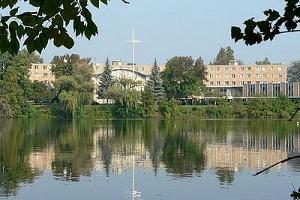 Sustainability is something most people are aware of, but for men in formation at Moreau Seminary on the campus of the University of Notre Dame, sustainability is part of stewardship for God's creations and of the resources donated to the Holy Cross Community by benefactors.

David Halm, C.S.C., is in charge of the local Green Seminary Initiative, which Moreau joined in September. GSI is a network of 45 seminaries whose goal is to incorporate care for creation into their identity and mission. GSI encourages the "greening" of seminaries through education, worship, buildings and grounds, community life and public ministry.

Halm said the benefactors of the United States Province are very generous and it's the goal to use their resources wifely and effectively. The green initiative was placed locally under the House Chapter's Social Justice Committee. The program also works with the Notre Dame Office of Sustainability.

Still in its infancy, the GSI program at Moreau has gotten more men to be mindful of their printing, carpooling, turning off lights and being more energy efficient in general. "We can't be wasteful of what we've been given, both by God and our benefactors," Halm said.

He explained that there is a spiritual aspect to sustainability as well: "We praise God for His creation by praying," Halm said.

The idea is even referenced in the Constitutions that guide members of Holy Cross, he noted.

"We are sojourners in this world, longing for the coming of the new creation as we seek to be stewards on this earth. The world is well provisioned with gifts from God's hand, but the gifts are often worshiped and the Giver is ignored.

"We want to live our vows in such a way that our lives will call into question the fascinations of our world: pleasure, wealth and power. Prophets stand before the world as signs of that which has enduring value, and prophets speak and act in the world as companions of the Lord in the service of his kingdom. We pray to live our vows well enough to offer such witness and service." (Constitutions of the Congregation of Holy Cross, 5:45)

"Anything in the Constitution is it for us," Halm said.

Moreau's men want to be a spiritual support in the larger sustainability community, he said. "We're responding to God's love and creation by being good stewards," Halm said.

At House Chapters, men hear readings by early Church fathers and Pope Benedict XVI about stewardship of the environment. The Sisters of the Holy Cross at Saint Mary's are a resource as well because they are involved in the sustainability movement. Halm gave a presentation at ND on the Feast of St. Francis. In addition, the goal is to raise awareness and be a resource for their brothers in Holy Cross parishes, universities and grade schools as well. Halm is not pushing sustainability as a political issue, but framing it as part of the vows of members of Holy Cross.

Holy Cross Religious take a vow of poverty, which also means not being wasteful, Halm said.

The response has been positive from his brothers, Halm said.

While not specifically part of the GSI, the U.S. Province has already begun to replace old, inefficient windows at the Seminary to help with energy cost and consumption. There is a fleet of 10 cars serving 30 seminarians, Halm said. Trees are being planted at the Province's property in La Porte, Ind., and the Moreau kitchen is growing an organic garden.

To read about the Green Seminaries Initiative, go to its website. You can also check out the ND Office of Sustainability.