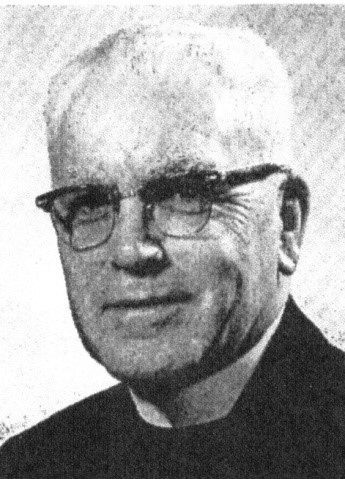 Brother Boniface, Brother Seraphim and Brother Hormisdas were known to many of us at Holy Cross Seminary (the Little Sem). All three were a presence at Notre Dame before, during, and after our departure from the university's Little Sem and Moreau senior seminary. In the early 1920's, when Brother Boniface and Brother Seraphim were young men, they arrived in America from Germany. They remained in each other's shadow for many years; initially as postulates in 1922, then while attending St. Joseph Novitiate in 1923, and when taking their final profession of vows in1927. Brother Hormisdas' first profession of vows was also in 1927, his final profession in 1930. All three Brothers had long tenures at the University of Notre Dame.

I'm sure that the three Brothers, though quiet participants, were dedicated Notre Damers, and appeared on the periphery of the many activities involving campus life. We seminarians frequently observed one or the other of the Brothers at Moreau seminary, or at Sacred Heart Church, or on the Little Sem grounds of Notre Dame.

BROTHER BONIFACE, C.S.C. Brother Boniface, C.S.C (Titus Landenberger) was the Sacristan at Sacred Heart Church at Notre Dame for 38 years. Our Holy Cross Seminary a cappella, 4-part choir occasionally sang the Mass at Sacred Heart. We did not realize the many demands that went along with Brother's responsibility as sacristan. And yet he assumed additional duties, often beyond the scope of sacristan. He would be seen giving direction to the altar-boys--Notre Dame students whom he personally recruited and trained-- or adding final touches to the many altars and chapels at Sacred Heart and in the residence halls. Sacred Heart Church had numerous special occasions that brought many Priests to the University of Notre Dame. With a smile and super efficient administration, he handled the Masses and ceremonies seemingly without a show of stress or great effort.

Brother Boniface had a smile for everyone and was well liked by both students and faculty. A student newspaper article summed up his campus popularity, "Nobody around here is indispensableunless it's Brother Boniface." Tom Hayes, a former Little Sem classmate, and our senior class president, commented that Brother had an outgoing personality. He was an extrovert by nature, sociable and friendly toward everyoneand admired for it. In the mid-1970's, Brother Boniface assumed his sacristan and other responsibilities at Notre Dame High School in Niles, Illinois. I had been long gone from Notre Dame and the Little Sem, raising a young family in Virginia. Yet, on a visit to Pittsburgh, Father Pete Sandonato, CSC, a fellow Pittsburgher and the religious superior of Notre Dame High School, commented to his parents regarding Brother Boniface's rapport with everyone. Later, Father Eugene Burke, successor to Father Sandonato, who knew Brother for over 30 years, commented on Brother Boniface's ability to relate to persons of any age, from children to young high school students, to adults and to persons of his own age. At the time, Brother Boniface was in his late 70s! 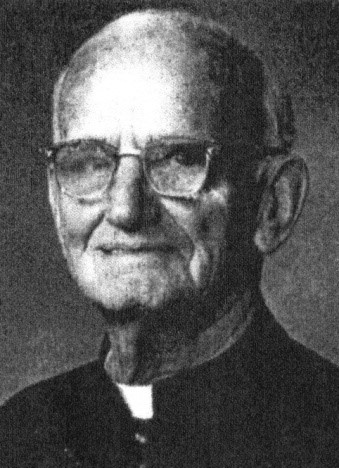 While we attended our classes, Brother Seraphim, C.S.C. (Edward Herrmann) devoted most of his 11 year tenure at Notre Dame to landscaping the grounds at Moreau Senior Seminary, doing large scale gardening, or planting treessometimes cutting them down--and caring for the large vegetable gardens and a few acre melon patch near St. Mary's Road. On our return to the Little Sem in the late summer of 1952, we seminarians felt obligated to taste the melons. Many disappeared along the border of the patch on St. Mary's road. I'm sure we had some concern that Brother had observed us, sneaking through the senior playing field and across St. Mary's road to gorge ourselves on the fruits of Brother's labors.

As an aside, in 1966, on a visit with my wife and two children to the Little Sem, I visited with Father Fiedler. Apparently, Father had heard the rumor that my sophomore class had stolen melons from Brother Seraphim's melon patch a dozen years earlier. Smiling, he asked if there was any credence to the rumor. I said that I had heard the same rumor. We both laughed. It was shortly after that I discover Brother Seraphim was still at Notre Dame, preparing to leave Moreau for Holy Cross House where he performed landscaping and gardening for another 20 years.

Brother Seraphim's landscaping efforts at Moreau produced works of art and beauty. He had an obvious green thumb and, while we were at the Little Sem, we feasted on the many varieties of harvested vegetables and fruitshome-grown food-- not only grown and harvested for our community tables, but also for many tables of the poor in the area.

Jerry Wood or Tom Hayes commented that Brother Seraphim was a sour puss, and then quickly added that Brother had a good heart. Father Len Banas elaborated, describing Brother as having a somewhat "crusty" exterior; but behind that first glance was a remarkable sense of humor, great kindness, urbanity and sensitivity to the finer things in life. "Brother had a great love of opera and good music." Father Banas should know Brother Seraphim well. On Father's several hour trips to Chicago and back, he would offer Brother Seraphim a ride to visit with the Brother's niece or nephew. 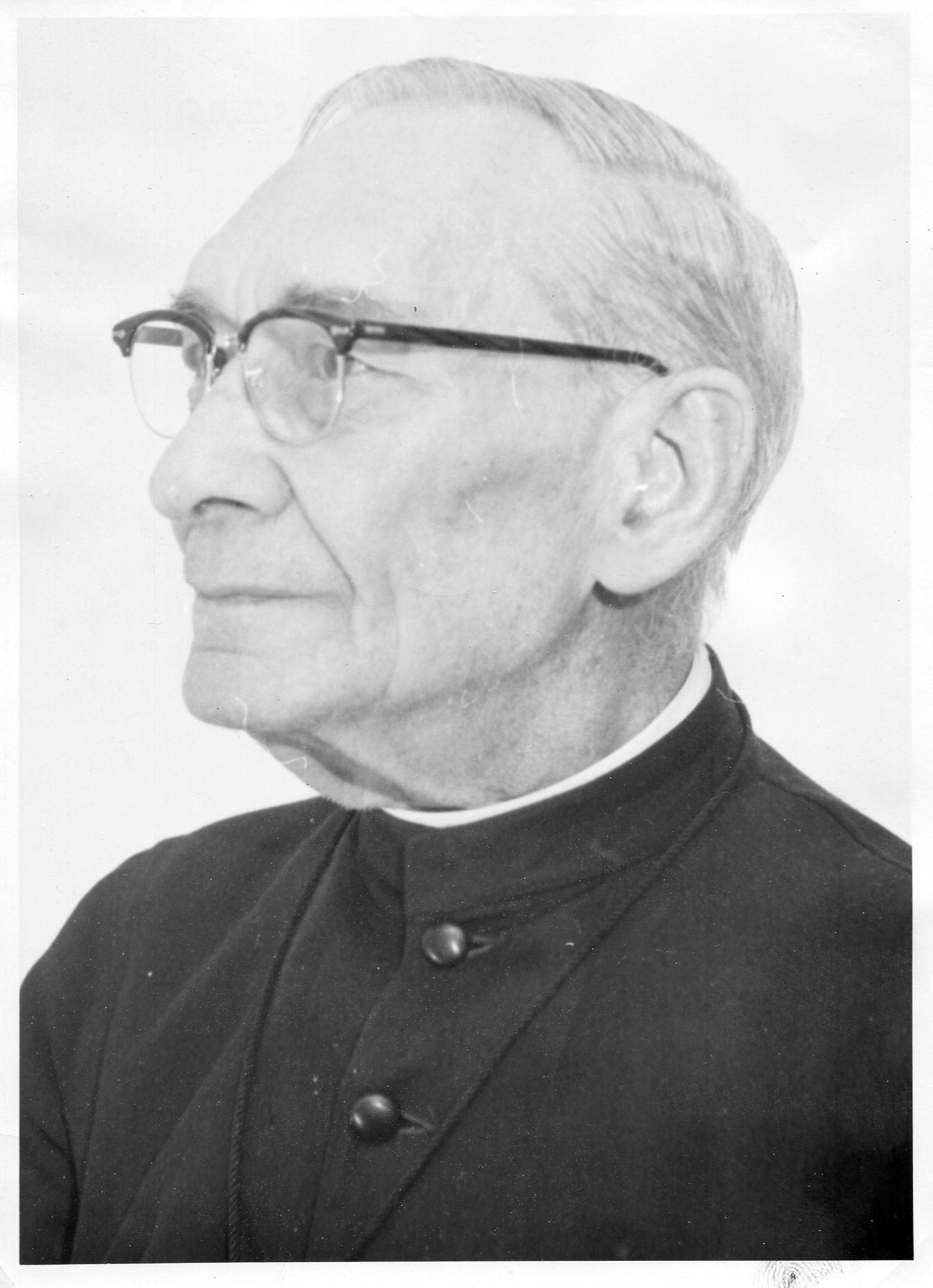 BROTHER HORMISDAS Jim Callahan, a fellow classmate and my senior year Little Sem roommate commented with incredulity "He could draw a perfectly straight line with a paint brush!" Brother Hormisdas, C.S.C. (Jacob Joseph Spanier) was an artist who loved to paint. Often he could be heard whistling quietly while he painted. He performed other maintenance functions as well, trained in carpentry, construction and tool and machine repair. During his nearly 40 year tenure, he travelled within the Holy Cross Congregation to six States and to Europe (Holy Cross parish in Czartorysk, Poland), performing his maintenance services in extreme cold and primitive living conditionshe later said he enjoyed it! It's been told that Brother painted every square inch of the Little Sem some areas more than once.

While in my senior year at the Little Sem, I was assigned the task of Priest waiter and saw Brother Hormisdas at breakfast, lunch and supper. This was part of his seminary philosophy. To help bolster morale at the Little Sem, Brother felt that, like other resident staff, we seminarians expected him to attend the meals, soirees, the movie nights, chapel meditations and Mass celebrations.

Brother Hormisdas's faith was one of his strongest virtues. He once commented that Faith is a lit candle in the hand, giving enough light for one step. "Take that one step and you have light enough for the next step."

Brother Hormisdas' life purpose was to do the will of God. The word "YES!" he explained was his favorite prayer. He was dedicated to faithfully fulfilling this prayer, often whispering it to himself and later sharing his prayer with the other religious at the Little Sem.

It does not seem that long ago that we seminarians had the unparalleled experience of spending our formative years living among the Brothers, resident Priests and Sisters at the University of Notre Dame's Holy Cross and Moreau Seminaries. We were blessed early on with walking examples of the exemplary life; and in their own quiet way, the religious shaped the character of each of us. This has served us well throughout our lives.

Andrew Stevans grew up in Pittsburgh, Pennsylvania. He is a Graduate of Holy Cross Seminary at the University of Notre Dame and George Mason University, Fairfax, VA. He currently lives and writes in Northern Virginia.