View a video and photo gallery of the Ordination of Revs. Adam Booth, C.S.C. and Patrick Reidy, C.S.C. 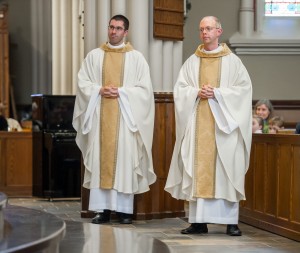 dam D.P. Booth, C.S.C., and Rev. Patrick E. Reidy, C.S.C., were ordained to the priesthood on Saturday, April 26, 2014, at the Basilica of the Sacred Heart on the Campus of the University of Notre Dame.

Rev. Thomas J. O'Hara, C.S.C., provincial superior of the United States Province of Priests and Brothers, presented the two deacons for Ordination during the 2 p.m. Mass. The Most Rev. Kevin C. Rhoades, bishop of the Fort Wayne-South Bend Diocese, conferred the Sacrament of Holy Orders.

On Sept. 7, 2013, Frs. Booth and Reidy professed perpetual vows of poverty, chastity and obedience and committed themselves to the common life and apostolic work of the Congregation of Holy Cross.

Fr. O'Hara commented: "Holy Cross rejoices with Adam and Pat as they begin their priestly ministries with zeal. We know that Adam and Pat, true to the Holy Cross charism, will be a blessing to God's people by making Him known, loved and served throughout the world as educators in the faith." 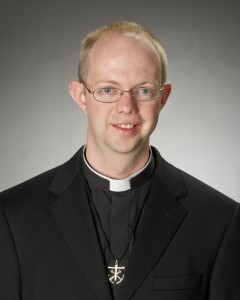 Rev. Adam D.P. Booth, C.S.C., is the oldest of three children of David J. Booth, Hertfordshire, U.K., and the late Carol E. Booth. Born in London, Adam graduated in 2004 from the University of Oxford, U.K., with a degree in math. He converted to Catholicism and encountered Holy Cross while studying at the University of California at Berkeley, where he received a master's degree in 2008. Prior to entering the seminary, Adam taught college mathematics for two years to men in the San Quentin State Prison. He entered formation with the Congregation in 2008 and professed First Vows on July 31, 2010.

Prior to his ordination as a transitional deacon, Adam served as assistant director of Old College Undergraduate Seminary (2012-2013). He also served at St. Joseph Parish, South Bend, in the marriage preparation and adult faith formation programs (2011-2012). In the summer of 2011, Adam served at Stone Soup in South Bend. In his first year as a professed seminarian, Adam offered grief counseling at Ryan's Place in Goshen, Ind. (2010-2011). During his Novitiate year (2009-2010), he was chaplain at Penrose Hospital, Colorado Springs, Colo., and also served at St. John Vianney Parish, Goodyear, Ariz. During his candidate year (2008-2009), Adam served at Holy Cross and St. Stanislaus Parish in South Bend in the Bible study program (2008-2009) and also spent time at Parroquia Nuestra Madre Santisima de La Luz,in Monterrey, Mexico (summer 2009). Adam earned his M.Div. from the University of Notre Dame in 2013.

As he begins his priestly ministry, Fr. Adam is excited to pray for and with others in new ways. "The greatest joys in ministry will be the times God puts me in just the right place at just the right time, to be pledge and reminder of the reality of God's presence, care and support at the moment when someone is vulnerable enough to be open to that." 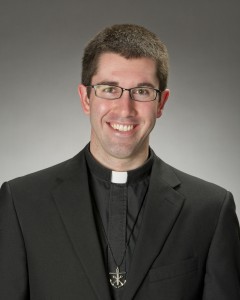 Rev. Patrick E. Reidy, C.S.C., will continue to serve as rector of Keough Hall and with the Office of Campus Ministry at Notre Dame. A Colorado native, he is the oldest son of the four children of Jean and Michael Reidy of Greenwood Village, Colo.

From 2012 to 2013, Pat coordinated student leadership development programs and retreats for Notre Dame Campus Ministry. During the summer of 2012, Pat worked with the Student Affairs Office at the University of Portland (Ore.) on Holy Cross Mission Engagement. He conducted marriage preparation programs at Christ the King Parish, South Bend, from 2011 to 2012. Pat directed the "Talking Circles" Student Mentoring Group at Rise Up Academy in South Bend the year before. When he was at the Novitiate in 2009 and 2010, he served as a chaplain at Penrose Hospital and at St. Andre Bessette Catholic Church (then-Downtown Chapel), Portland, while living at the University of Portland and serving with Campus Ministry. During his candidate year (2008 - 2009), Pat was a RCIA team member at St. Joseph Parish in South Bend.

Fr. Pat earned a bachelor's degree in political science in 2008 from the University of Notre Dame and received his M.Div. in 2013. He entered formation with Holy Cross as a postulant in 2008. He made his First Profession of Vows on July 31, 2010.

Fr. Pat said as a priest he looks forward to working in education and to live the example set by those who mentored and inspired him during his formation: "They helped me seek a kind of completeness in God's call, learned and discerned through the formation of my mind and heart, of my whole person. My passion for mission flows from their example. I want to assist students not only in recognizing and developing their own gifts, but also in discovering their lives' deepest longing: to become the men and women that God created them to be."