Two Popes to be Canonized April 27

Two Popes to be Canonized April 27

The Congregation of Holy Cross, United States Province of Priests and Brothers, rejoices with the worldwide Catholic Church on the Canonization of Pope John XXIII and Pope John Paul II. Churches across Rome will observe a "White night of prayer" that includes prayer, readings, Liturgy and confessions beginning at 9 p.m. Saturday, April 26. Pope Francis will preside over the Mass of Canonization in St. Peter's Square at the Vatican at 10 a.m. (Rome time) on Sunday, April 27, 2014 Divine Mercy Sunday. About 1,000 cardinals, bishops and priests will concelebrate the Mass. Vatican TV will live stream the Mass. Following the Mass, there will be a visit to the tombs of new saints. On Monday, April 28, there will be a Mass of Thanksgiving in St. Peter's Square. Cardinal Angelo Comastri will preside. You can find out more information about the Catholic Church's newest saints, as well as more details on their canonization on the official canonization website, available in five languages. 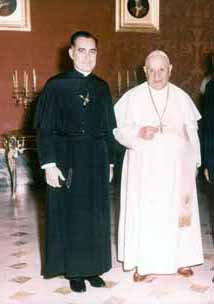 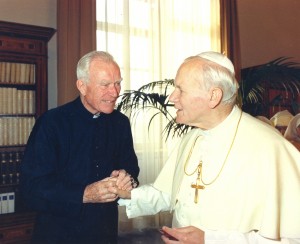