The candidates are seeking to succeed University president Rev. E. William Beauchamp, C.S.C., who announced in September that he is stepping down as president at the end of the 2013-14 academic year. Beauchamp was appointed the University's 19th president in November, 2003.

"The University of Portland has been extremely fortunate over the last decade to be led so capably by Fr. Beauchamp," said Thomas D. Arndorfer, a member of the University's Board of Regents and chair of the Presidential Search Committee that consists of 14 members of the UP community. "I speak on behalf of the Presidential Search Committee and my fellow regents when I say that we are equally blessed to have two outstanding candidates who are well qualified to build upon the foundation laid by Fr. Beauchamp and his predecessors, guiding the University forward while remaining true to our mission of teaching and learning, faith and formation, service and leadership." 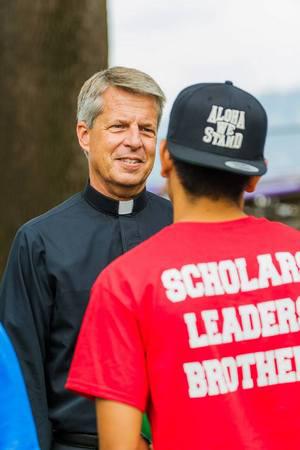 "Over the next several weeks, we hope that this will be a collaborative, cross-functional, and comprehensive process that allows us to identify the individual best suited to lead the University of Portland in the years ahead," Arndorfer said.