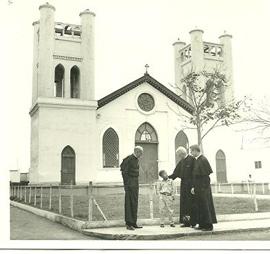 Holy Cross priests and brothers began their ministry in Peru in 1963 to provide pastoral care to field hands and factory workers at a sugar cane hacienda. Since then, our ministry has evolved and the District of Peru was established in 1976. Our largest parish, Parroquia el Senor de la Esperanza (Lord of Hope Parish),was founded in 1977 in Canto Grande, Lima. It remains the hub of our ministry in Peru, serving 250,000 parishioners in one of the most impoverished areas of Lima. Click here to read more about the District of Peru The Congregation of Holy Cross, United States Province of Priests and Brothers, recently released the following documentary which describes the various ministries in the District: (13 minutes) Haga clic aqui para obtener la version espanola(Spanish version) More About the Holy Cross Mission Center The Holy Cross Mission Center is sponsored by the U.S. Province and supports those locations for which the U.S. Province has direct jurisdiction, those areas with which the U.S. Province has a special relationship along with supporting the Congregation of Holy Cross' worldwide international mission work. Ways to give to Peruor other Holy Cross Missions