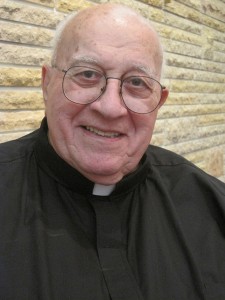 He was born on Jan. 2, 1923, in San Giuseppe Jato, Italy, to Carmelo and Maria (Migliore) Miceli. The family settled in upstate New York when Fr. Miceli was six years old. He graduated from Oswego High School, Oswego, N.Y., in 1942. He was received into the Congregation of Holy Cross on Aug. 15, 1943, at the Novitiate in Rolling Prairie, Ind., and made his First Profession of Vows on Aug. 16, 1944. Fr. Miceli received a Bachelor's Degree in philosophy from the University of Notre Dame in 1947; a Bachelor of Sacred Theology from the Gregorian University, Rome, in 1949; and a Licentiate in Sacred Theology from Catholic University, Washington, D.C., in 1952. Fr. Miceli made his Final Profession on Aug. 16, 1947, and was ordained into the priesthood on Feb. 9, 1952, in Washington, D.C. He also studied theology at Holy Cross College in Washington from 1952 to 1954.

After studying in Washington, Fr. Miceli taught at Notre Dame from 1954 to 1962. He also served as Rector of Stanford Hall for three years. In 1962, he taught at the University of Portland (Ore.). Fr. Miceli taught at Notre Dame for the next 30 years, from 1963 to 1993. He also served as Rector of Cavanaugh Hall from 1963 to 1990, holding the record at the time as longest-serving Rector of the same residence hall. A Cavanaugh alumnus set up a Rev. Matthew Miceli Scholarship in his honor and 17 children have been named after him: 16 Matthews and one Matthea. Following his stint as Rector, Fr. Miceli lived in-residence at Notre Dame, helped with student hall and garden management and regularly celebrated Mass in chapels across campus and in retirement communities in South Bend. He also kept up with wine making and his small vineyard on Bulla Road. Fr. Miceli moved to Holy Cross House, Notre Dame, Ind., in 2007, where he remained until his death.

Survivors include a brother, Francis of Pleasant Hill, Calif.; a niece, Maria Miceli Dotterweich in Jackson, Mich.; along with other nieces and nephews in New York. Fr. Miceli was preceded in death by his parents, Carmelo and Maria, and a brother Bart.