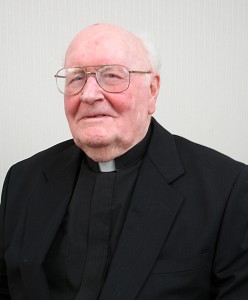 World War II saw Fr. Paul in the Army serving in Africa, Sicily and Italy. Upon his discharge in 1945, he attended the University of Notre Dame on the G.I. Bill and earned degrees in philosophy and commerce.

During his student years, he felt the call to religious life and priesthood and entered the Holy Cross Novitiate on August 15, 1949. He professed first vows the following year. The next two years, he furthered his studies at Moreau Seminary before entering Holy Cross College, Washington, DC, in 1952.

Due to the serious illness of his mother, Fr. Paul was ordained to the priesthood in St. Mary of the Assumption Church in Lancaster on November 11, 1955 by Bishop Burke of Buffalo.

Fr. Wendel's first assignment was to teach at Notre Dame High School. The next year, he moved to the University of Notre Dame to teach and prefect. In 1962, he was made Assistant Vice-President for Business Affairs and remained in that position for eight years.

In 1970, Fr. Wendel moved to Moreau Seminary as assistant superior for the next four years, before moving to St. Joseph Parish in 1974 as pastor. In 1980, he took a year of study at the Holy Cross Center in Berkeley, CA where he was formation director.

The next year found Fr. Paul assisting at Holy Cross in South Bend. He left there in 1985 for further study before moving to Fatima Retreat House in 1986. He was a popular retreat and spiritual director there for nine years. In 1995, he was named assistant superior and steward at the Mission House.

Since 2004, Fr. Wendel resided at Holy Cross House serving as a member of the House Council and assisting wherever needed.

Fr. Wendel is preceded in death by his parents, Joseph and Louise Wendel, his brother Arthur, and his sister Wilma. A wake service will be held at Moreau Seminary at 7:30 P.M. on Thursday, November 6, 2014 and the Rite of Christian Burial will be celebrated at the Basilica of the Sacred Heart Friday, November 7, 2014 at 9:30 A.M. Burial will follow at the Holy Cross Community Cemetery.

We welcome and extend our sincerest sympathies to the friends, lay colleagues and the community of Sisters, Brothers, and Priests of Fr Paul Wendel who have come to celebrate his life with us today. For today is a day of great celebration, joy, and gratitude to God for giving us this holy man to walk with us on our journey to God.

I think today's gospel reading best describes Fr Paul Wendel when Jesus says, "I give praise to you, Father, Lord of heaven and earth, for although you have hidden these things from the wise and the learned you have revealed them to the childlike." Matthew 11:25 I think in reflecting on Fr Paul's life we begin to understand what Jesus meant by the "childlike."

When I asked some of Paul's friends to describe Paul and his impact on their lives I heard gentleness, prayerful, compassionate, soft-spoken, spiritual guide, thoughtful, honest, good friend, community man, great supporter, precious smile, quiet and a perfect gentleman. In some ways one might characterize Paul as the ideal pastor and spiritual mentor. After reflecting on this list of attributes one might conclude "saint."

But maybe that's getting a little ahead of the game for Paul was truly a humble religious and priest who sought to do God's will each moment of every day of his life.

Some 27 years ago I was assigned to live and work at Fatima Retreat Center, (now Fatima House a house of independent living for Priests and Brothers) and began a journey with Fr Paul that spanned these 27 years and many different experiences of ministry in both our lives.

I got to know and appreciate Paul as a religious and priest who truly loved his calling to serve God through service and love of God's children. He was a Holy Cross religious who responded to God's calling as shown to him through his superiors fulfilling his desire to know, love, and serve God with all his heart mind and soul and to love his neighbor as himself.

Paul was a late vocation entering Holy Cross at the age of 28 after serving in the Army in Africa, Sicily, and Italy in World War Two. At times when some of us older religious reminisced about our lives during World War Two, Paul would show his wonderful grin and remind us that while we were limited in our consumption of meat and other food products by rationing during the war here in the states, the troops in Sicily and Italy were enjoying a steak or two.

After his stint in the Army he studied here at Notre Dame earning degrees in philosophy and commerce. During this time he felt called to join the band of men and women of Holy Cross and entered our novitiate in 1949 and was ordained a priest in 1955.

Fr Wendel's assignments were like stepping stones along the journey of his religious and priestly life. He didn't seek his assignments but humbly accepted them even though some seemed to be "tasks beyond talents" as outlined in our Constitutions and were crosses in his life. He was asked to teach, to be an administrator, formator and assistant superior, and both a pastor and associate pastor, It was not until he was assigned to Fatima Retreat Center in 1986 that he began to find his true area of comfort in working with the people of God walking with them in a unique way as they traveled the path of their spiritual journey.

Referring back to today's gospel reading, "All things have been handed over to me by my Father. No one knows the Son except the Father, and no one knows the Father except the Son and any one to whom the Son chooses to reveal him." Matthew 11:27 Paul became an agent and instrument of God in the lives of so many helping them to discover God's word and its impact on their lives. Paul was one whom the Son has chosen to use to reveal the Father.

But the next verses of the gospel truly speak of God's work shown through the ministry of Fr. Paul, "Come to me, all you who labor and are burdened, and I will give you rest. Take my yoke upon you, and learn from me; for I am meek and humble of heart, and you will find rest for yourselves. For my yoke is easy, and my burden light." Matthew 11:29-30

In his work at Fatima Retreat Center Paul was a spiritual guide, teacher and mentor. His very personality and deep relationship with God and his Son Jesus were evident to all who sought his counsel and direction. People loved to be in his presence because he seemed to radiate a sense of peace and calm, a sense of gentleness and tenderness, a sense of understanding and compassion. And it was these spiritual qualities that spoke to people about Christ's words, "I give praise to you, Father, Lord of heaven and earth, for although you have hidden these things from the wise and the learned you have revealed them to the childlike." Matthew 11:25

For Paul, love was the truest of all truths; hence his deep sense of personal responsibility towards others. The love of Christ and Him Crucified permeated the whole life and character of Paul, and he placed the chief hope of redemption and redress for a suffering humanity in the literal imitation of his Divine Master.

In 2004 the Holy Cross Community needed to convert Fatima Retreat Center into a "religious house for independent living for priests and brothers as our community was growing older and more space was needed to allow our members to age in place while still fulfilling to the degree possible the ministries of the local church and the community.

At that time, we needed a spiritual guide, confessor, and pastoral advocate at Holy Cross House, our medical religious facility here at Notre Dame. Paul was invited to come and live at Holy Cross House and walk with the brothers and priests living there. With his usual generosity and humility he accepted this as another step in his spiritual journey, knowing full well that this most likely would be the final step before he was called home by God.

He was a gift to all living there, as he assumed the pastoral roles of spiritual confidant, confessor, and true community friend to all.

Fr Paul Wendel has been called home by God to receive his eternal joy in the presence of the God he loved so faithfully.

The prayer of St Francis was and is Fr. Paul's continuing prayer for all of us as he lives and reigns with the God he serves so faithfully and well a prayer that he continues to offer on our behalf.

Lord, make me an instrument of your peace,

O Divine Master, grant that I may not so much seek
...to be consoled as to console;
...to be understood as to understand;
...to be loved as to love.