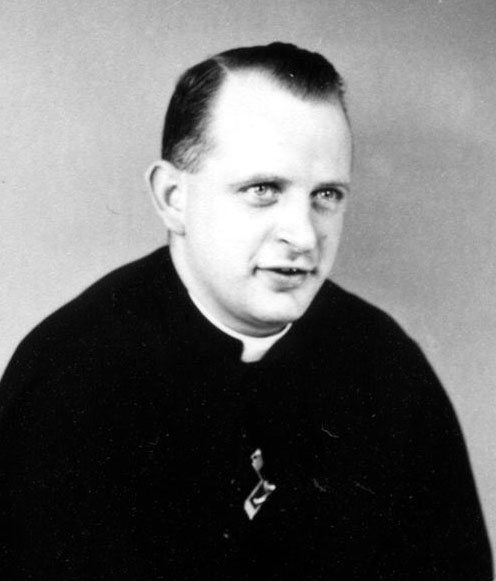 He was born on April 26, 1930 in Chicago, Ill., to Richard and Miriam (Sugrue) Seidel. He was one of eleven siblings.

He graduated from the University of Notre Dame in 1953. After graduation he studied theology at Holy Cross College, Washington, D.C., and was ordained a priest on June 5, 1957.

Throughout his life, Fr. Seidel had many assignments across the United States, as well as in East Africa. Remarkable and relatable, he not only taught in educational apostolates across the country, but saw to the pastoral care of those in parishes where he assisted, and was a counselor and chaplain for schools and medical facilities.

After being ordained to the Congregation in 1957, Fr. Seidel taught at Holy Cross Seminary, then St. Joe Hall in Notre Dame, IN, before returning to his home state of Illinois to teach at Notre Dame High School for the next eleven years.

Fr. Seidel would return to the University of Notre Dame in 1970 as a rector and counselor, then go on to teach for four years at Notre Dame High in Riverside, Calif. In 1977, Fr. Seidel evolved his role as teacher and for the next year, served in clinical pastoral education in Orange County, Calif. He then served as director of the Pastoral Care Dept. at St. Mary's Hospital before returning to education briefly as a teacher and counselor at Bourgade Catholic High School in Phoenix. He then returned to California to begin a chaplaincy at Mercy Hospital in San Diego in the Pastoral Care Department from 1984 to 1986.

Having so diligently and wholeheartedly cared for the young receiving an education and for the ill, Fr. Seidel's gifts for pastoral care were next utilized in parish ministry from 1986 to 1991 first at St. Cecilia Parish in Tustin, Calif., and then at Holy Spirit Parish in Fountain Valley, Calif. Fulfilling many roles in education and parish, Fr. Seidel would not overlook the rich spiritual work waiting for him in mission. He assisted in the District of East Africa from 1991 to 1993 before returning to parish ministry at Our Lady of Lourdes Parish, Northridge, Calif., for the next three years.

From 2007 to 2009, Fr. Seidel resided at Casa Santa Cruz in Phoenix, Ariz., before permanently returning to the South Bend, Ind., area first at Holy Cross Parish, South Bend, Ind., in 2009, then Our Lady of Fatima House in Notre Dame, Ind., where he enjoyed active retirement.

We welcome and extend our sincerest sympathies to the family of Fr Tom Seidel, especially his sisters, Mary and Catherine and his brother James, the other members of his immediate family and his friends, lay colleagues and the community of Sisters, Brothers, and Priests of Fr Tom who have come to celebrate his life with us today.

I think today's gospel reading best describes Fr Tom Seidel when Jesus says, "I give praise to you, Father, Lord of heaven and earth, for although you have hidden these things from the wise and the learned you have revealed them to the childlike." Matthew 11:25 In reflecting on Fr Tom's life we begin to understand what Jesus meant by the "childlike".

I worked with Fr Tom when he was at Notre Dame High School for Boys in Niles, IL from 1959 1970 and then was with him off and on as he made his journey through a number of different assignments. Our paths merged again in the summer of 2012 when I was assigned as the religious superior of Our Lady of Fatima House where Tom was residing.

Tom was a teacher of the classics and at his first two assignments after ordination he taught Latin, first to the seminarians at Holy Cross High School Seminary, then to the men at St Joseph Hall, both here on the campus of Notre Dame.

His next assignment was at Notre Dame High School for Boys in Niles IL where he also taught Latin and was a moderator for the Cross and Anchor Society at the high school. Cross and Anchor was a student organization founded to give service opportunities to the many students at the high school principally those who were not varsity athletes. Tom moderated the Concession Division for all sports activities and concessions within the school. His world was a world filled with young men eagerly making popcorn, and selling it along with pop and ice cream at all events in the school. The young men he worked with found in him a spirited leader who could be tough but always had their interests in mind. They held him in high esteem.

Tom's life of 58 years of priesthood was a difficult one and was a struggle for him and for the many, who knew him, cared for him, and loved him.

He spent time working in high school ministry in two different high schools, a number of parishes throughout the country, time in East Africa, and as a hospital chaplain. As he moved through these various ministries he seemed to be looking intensely for his place in the mission of Holy Cross, not spending extended periods of time in any given assignment.

In his 2nd letter to the Corinthians Paul tells us;

"This treasure we possess in earthen vessels, to make it clear that it's surpassing power comes from God and not from us;

We are afflicted in every way possible, but we are not crushed; full of doubts, we never despair;

We are persecuted, but never abandoned; we are struck down, but never destroyed;

While we live we are constantly being delivered to death for Jesus' sake, so that the life of Jesus may be revealed in our mortal flesh." (2 Cor 4:7-11)

Tom was one who cared for others but inside, Fr. Tom's soul was restless. He was very quiet and private.

As I reflect on his life and try to visualize his life journey with Jesus in his religious life and priesthood, I think he identified with the poor, with those who struggled with life itself, and with his own sense of self-esteem. I am sure that as he read and reflected on scripture, he identified with Christ's special love, compassion, and mercy for the disadvantaged, with those for whom life seemed to offer many challenges and pitfalls.

All of these issues become crosses, often heavy crosses, which we have to bear but hopefully, with the helping hand of Jesus Himself, we became able to see and carry these crosses as gifts.

My soul is deprived of peace,

I have forgotten what happiness is;

I tell myself my future is lost,

all that I hoped for from the Lord.

The thought of my homeless poverty

is wormwood and gall;

Remembering it over and over

leaves my soul downcast within me.

But I will call this to mind,

as my reason to have hope:

The favors of the Lord are not exhausted,

his mercies are not spent;

They are renewed each morning,

so great is his faithfulness.

My portion is the Lord, says my soul;

therefore will I hope in him.

Good is the Lord to one who waits for him,

to the soul that seeks him;

It is good to hope in silence

for the saving help of the Lord

I have learned many things from Tom about traversing this journey here on earth, giving it meaning through those who are fellow travelers. Each of us is God's agent and instrument, prophet and mentor to someone, to others. To know how God speaks to one through others is a special gift. Tom has spoken to us through his journey and we thank God for him in our lives. Hopefully, he has impacted many of us in such a way that our conformity to Christ has been altered, reshaped, and nurtured and that our appreciation of the Cross of Christ and His Passion, Death, and Resurrection have taken on greater depth and meaning.

The Constitution of the Congregation of Holy Cross on the "cross as our only hope" says:

"If we drink the cup each of us is poured and given, we servants will fare no better than our master. But if we shirk the cross, gone too will be our hope. It is in fidelity to what we once pledged that we will find the dying and rising equally assured.

The footsteps of those men who called us to walk in their company left deep prints, as of men carrying heavy burdens. But they did not trudge; they strode. For they had hope."

May Tom find eternal peace and fulfillment with the God whom he served so faithfully throughout his life's journey.