A Habit of Proclamation

A Habit of Proclamation

The other day I had a conversation with a theology classmate who just recently was received into the Catholic Church. He had seen at the previous Notre Dame Football game that the brothers and seminarians from Moreau Seminary were taking shifts at the Grotto to greet visitors, answer questions, and to pray with them. What struck him was that all of us were dressed in our habits and that we did not have to approach people but rather people approached us. He told me that as a former Evangelical Protestant this was one of the attractive parts of Catholicism, namely the visible witness and invitation to the Gospel made by religious who proclaim with their entire life and dress that they belong to God. 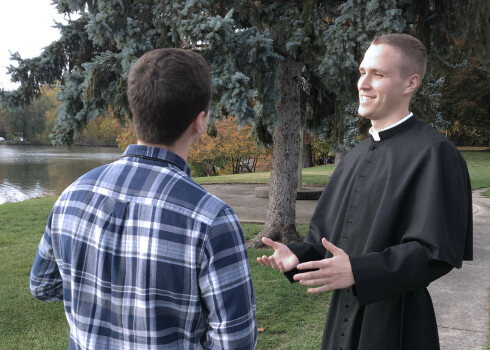 This conversation with my classmate really stuck with me. I have reflected on it many times since. His observation reminds me of a very memorable experience I had in the Novitiate. We wear the novice habit nearly every day at the novitiate but most days we are not seen by anyone other than by parishioners on Sunday’s or other visitors to our property. One day on our way back from spiritual direction, my fellow novice Brad and myself decided to stop by a local Walmart to pick up a few things. We were in our habits and while walking into the store entrance the Walmart greeter stopped us, pulled out his phone, and immediately started reading off religious jokes. After courtesy laughing at a few corny jokes we introduced ourselves and Joe the Walmart greeter went right into his life story. He was divorced, a recovering alcoholic, an atheist most of his life and to our surprise he shared with us that his son is a Jesuit priest. Joe told us how his son’s faith brought him back to a strong belief in God and though he still found it hard to join the Catholic church he was now a Born-Again Christian and going to a local bible college. He told us about an intense encounter with God that he had in the woods which really changed his life. He also shared with us that a major source of healing came from reading the Stations of the Cross during a visit to a Catholic Church with perpetual adoration. Joe told us his faith journey wasn’t over and that he was so grateful to enjoy a spontaneous moment to share his faith with us during his work day. Both Brad and I were moved by Joe’s openness and clear love for Jesus Christ. 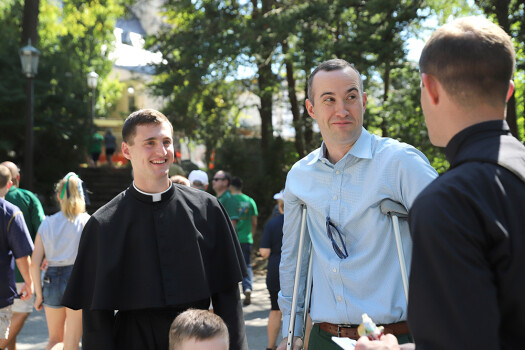 Joe stopped us because from the moment he saw us he knew that in some way, to some degree we were interested in God. By wearing our habits, we proclaimed even in a Walmart that our entire life is dedicated to God and this physical symbol of an internal reality provided an opportunity and an invitation for others to think and talk about God. It was in moments like these that I saw the life-giving nature of a public profession of religious life. For Joe, I was an invitation to share his encounter with God and in return Joe was an inspiration for me to give myself even more fully to Jesus Christ in my vocation as a religious. Both Joe and my theology classmate were great reminders to me of the important role religious have in the Church to be a sign of God’s love in a world deeply in need of it. This is no easy task for any Christian but as a newly professed Religious of Holy Cross I am up for the challenge and excited to continue to encounter God’s love in my own life and strive to bring that love to all I meet, whether at the grotto or at Walmart.

David Slonkosky, C.S.C., is in his first year of temporary vows at Moreau Seminary. He just finished his novitiate year in Colorado Springs, Colorado, and he is originally from Minster, Ohio. David previously attended Holy Cross College and The Culinary Institute of America. He is now working on completing his M.Div. at the University of Notre Dame. David also enjoys singing and playing the banjo, hiking, playing squash, and baking bread.

As the son of a college football coach and a former student worker in the Notre Dame football...

Friendship in Holy Cross: The Bond of the Holy Spirit

If anyone was to meet me for the first time, they would probably learn two things very quickly...

During my novitiate year in the Congregation of Holy Cross, I had the opportunity to take my...