A Homeless Couple, a Faithful Love

A Homeless Couple, a Faithful Love

As we enter the summer months, in many parts of the country summer is wedding season. At André House several married couples come regularly to eat with us, to use the clothing closet, or to take advantage of one of the other services we offer. In this wedding season, I feel drawn to reflect upon marriage relationships I have seen here. 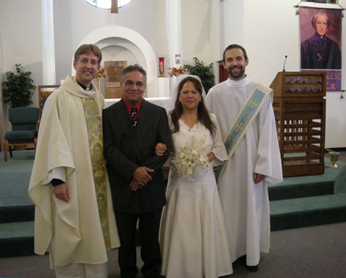 One thing I learned quickly is that not all couples who are "married" would actually be able to produce a marriage license/certificate. Relationships on the streets do not always look exactly like one would find in a traditional nuclear family. Even so, I have seen several instances of touching love.

We have some couples who come for our evening meal with one pushing the other in a wheelchair. As I handed out tickets at the front gate for the dinner one night, a couple wheeled up. The one in the chair said to me, "He's driving, but I'm taking care of the tickets." Sounded like a fair division of labor. In fact, a couple of couples have one person in charge of the meal ticket because the other one has a habit of losing or misplacing things. 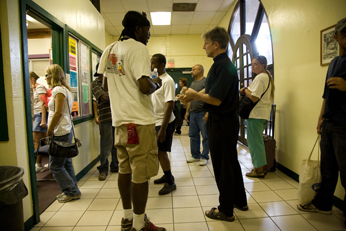 This week meditating upon the couples at André House, I found myself surprised by the couple that touched my heart the most. When I arrived at André House, I found Doug and Julie sitting in the parking lot where they had been sitting for some years. One of the people who had been around André House for years commented to me that he was tired of them sitting around all the time, apparently not trying to do anything more with their lives. Every once in a while through the years we as a staff were "blessed" with commentary by this couple about things we said or how we handled certain situations. Although some comments were positive, not all were … nor were they all positively received.

It can be easy to judge people who are homeless. These last four years at André House have made me wonder whether the most discriminated group in the country is not the illegal immigrant or some other minority group as defined by race. Perhaps the most discriminated is the homeless person, constantly facing policies to discourage either them or organizations that help them from coming into "my neighborhood." I can assure you that NIMBY – Not In My Back Yard – is quite alive and well in the United States.

Yet the story of Doug and Julie goes deeper than a couple spending their days sitting in a parking lot, periodically holding court and making commentary – and the judgment their apparent inactivity lead some to make. For several months one year Julie was incarcerated. During her incarceration, Doug wrote a letter to Julie every single day. He often gave it to a certain staff member knowing that person would mail the letter that same day. Once, when that staff member was not there, it took him quite some time and convincing to hand over the letter to another staff member and to trust that his letter would be mailed that day.

Both Doug and Julie have struggled with addiction issues. Several months ago, they had a highlight that they shared with us. They celebrated their anniversary – 36 years together. Making it through 36 years as a couple was impressive enough. But this anniversary they shared that they were more happy and excited than they have been for a while. It was their first anniversary in decades that they could celebrate together in which neither was in jail, and neither of them was drunk or using drugs. 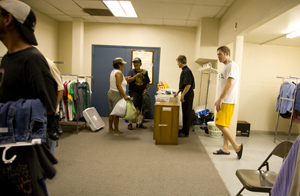 "I promise to be true to you in good times and in bad, in sickness and in health. I will love you and honor you all the days of our lives" (marriage vows formula A – Rite of Catholic Marriage). So many couples fail to stay together for various reasons today. I find a couple like Doug and Julie who are able to weather the storms of addiction, incarceration, and life on the streets truly amazing and uplifting. They have stuck together "for better, for worse, for richer, for poorer, in sickness and in health," (marriage vows formula B) in a way I could not have imagined.

This past week I meditated on their story while preparing a homily for Trinity Sunday, and their story helped me to reflect on the nature of our God. When writing about the Trinity, St. Augustine once used a comparison to the Lover and the Beloved with the Love in between. The Lover is not the Beloved, nor vice versa, but with the Love in between, the two are one. Doug and Julie have remained one in unity because of the love that they share together – a love that is not based on physicality, nor even proximity. It is a love of the heart. A love that is willing to forgive. A love that is willing to endure. A love willing to give another chance.

I believe that this is the love that our God has for us – a love that rejoices in our successes, while also willing to lend a hand when we fall down. Each day God writes us a love letter – one that we can read if we open the Scriptures or open our eyes to the wonders of nature or the beauty of the people around us.

We don't see Julie and Doug around André House any more. They now rejoice in the fact that they have their own place to live, so they do not hang out in our parking lot. I pray that God may continue to bless them with days together – clean and sober and out of trouble in all sense of the word. I pray that God may bless all couples and all who have professed vows with the grace of persevering love that He has bestowed on this couple. Finally, I pray that God will continue to open my eyes to see images and reflections of God in a seemingly unlikely place, like in a homeless couple just sitting together in a parking lot.