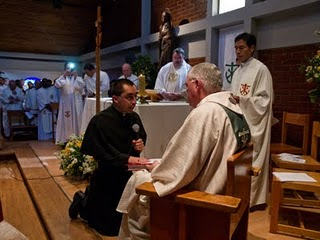 A blessed Easter Sunday to one and all! Of all days of the year, today is certainly one to share Good News, and so we want to share the recent Good News of the final profession of one of our seminarians in the District of Chile, Mr. Rodrigo Valenzuela, C.S.C. The District Superior, Fr. Michael M. DeLaney, C.S.C., filed the following post for us.

Gathered in the chapel of Saint George's College on the Feast of Saint Joseph was the Holy Cross Community in Chile, with confreres from Peru, Mexico, Haiti and the United States. Together with our brother, Rodrigo Valenzuela, C.S.C., as he made his perpetual profession in Holy Cross, we were witness to one of the most important moments in the life of a religious.

In that moment, Rodrigo professed his faith in God and his desire to live and die as a member of the Congregation of Holy Cross – to share his life in the service God's people as a religious, called by the Father to imitate Christ's love and connect with others through the Holy Spirit. It was the culmination of many years not just of formation, but in reality of being called by God throughout his life from the historic and beautiful city of Valparaíso, Chile, to the Congregation that has served in Chile since 1943. It is but another step in his life-long vocation to respond to the call from God to serve His people and share in His Love.
It was a moment that made us all so proud to be with him, his family and with one another. This young religious we have known well during his years of initial formation – his great intellect and his pastoral sensitivities, his genuineness and his generosity, his humility and his dedication to service. His final profession brings us all much hope for our Congregation, for the Holy Cross community in Chile, and the Church in which we serve.
Accompanied by his fellow religious, his family, many of his students and collegeagues from Saint George's and Colegio Nuestra Señora de Andacollo, and lay colleagues from all of the ministries of the Congregation in Chile, we were all moved with the beauty, the simplicity, and the profundity of his profession in the celebration of the Eucharist.
During the liturgy, I showed all those gathered two books that are well known to the members of the District of Chile. The first was the Constitutions of the Congregation of Holy Cross, the guiding words which shape our lives as religious and offer us the ideals for which we strive as we answer this call from God to live out or vocation faithfully and generously. The second was the book of the Actas of Votos … the written record of all those who, in Chile, have answered the call from God to profess their vows according to the Constitutions. It is filled with their signatures and those of their superiors dating to the first religious in Chile who made his profession – Fr. Jorge Canepa, CSC. He signed this book on page one almost 60 years ago and was in attendance at the mass. The most recent include the newest members of the District, three seminarians from Haiti who renewed their vows in September 2010, after newly arriving in Chile. And now, of course, Rodrigo Valenzuela who signed along with his witnesses on page 100, making a written record of his perpetual commitment in Holy Cross. 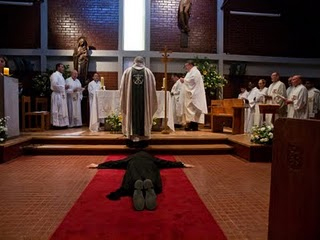 Both the Constitutions in their poetic language and that the written historical record of all who have professed vows in the Congregation as part of the District of Chile refer to the "Great Band of Men who have answered God's call and who have walked together in mission." I could not help but reflect during this liturgy with CSCs from Mexico, Haiti, the United States, Peru and Chile present, we are indeed very blessed by the legacy of Blessed Basil Moreau and his missionary zeal as well as the legacy of so many who have come before us. Now, together, it is ours to continue and further!
I wondered where the Spirit would lead Rodrigo in his life and service in Holy Cross – looking back at my own and never having imagined the richness and beauty that our consecrated life has offered me as a member of the Congregation. I pray that Rodrigo experiences all that and more! May he, now having professed to share his life forever in the Congregation of Holy Cross, have every blessing each step of his journey. When there are challenges, may he know of the unending love of God and the support of his community. In the joys, may he remember they are from the same God, and to share that with his community as well! And, may he always cherish the People of God whom he has been called to serve, and carry to them this legacy which is ours in Holy Cross. Amen.