Most places I have ministered have had a few characters who stand out more than others – in both good and other ways. André House definitely has its cast of characters. This month I want to reflect on a guest who I will call Neil.

Neil is a skinny, dark skinned, African American man who has quite a religious streak in him. Sometimes you can find him preaching to the streets, with the habit of going down to his knees – sometimes just genuflecting on one knee, other times down on both knees. Almost as soon as he goes down, he comes right back up.

The first couple of weeks when I saw Neil going down and up, I had no idea what to make of him. I knew that he mumbled and wondered how his poor knees could take all that down and up, but I never took the time to find out why he did that. Eventually one of the other Core Staff members told me that she thought his exercises were religious, and that he bowed when he said God's name or was preaching about God. As a priest, I felt a little ashamed for not taking the time to notice – and wondered about my reverence for God's name in the face of someone who literally bent his knees at the Lord's name. 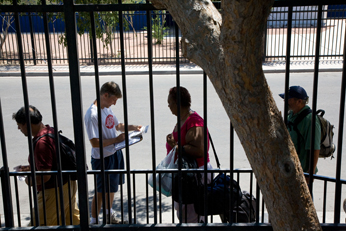 One day as I passed out tickets for the soupline at the front gate, Neil was in rare form, pontificating from the middle of the street at the masses sitting in our parking lot. As he was getting louder, other guests started getting more agitated. So I asked Neil what he wanted to preach about, trying to attract his attention to me rather than to the rest of the guests. Neil said, "Father, I know you know about righteousness." I responded that I do … without saying that we Catholics do not really use that term too often (and wondering why it may scare us).

"What about righteousness?" I asked.

"You know the story of Jonah," he responded.

"Yes I do. What about the story of Jonah?"

I don't recall my translation of the Bible using the "N" word. Nor do I think that it will be used in the new translation of the Roman Missal. Then again, the vernacular of André House does not necessarily match that of the rest of the English speaking world. Neil's voice still carried, but he no longer shouted as he started to recount the story of Jonah. "You know, how God told Jonah to go to Ninevah. It was filled with people who were not righteous. God wanted him to go to that city to preach to them to repent. God told him to go to Ninevah. And Jonah said, 'This N-----r ain't doing that.'"

Neil ended up recounting, quite accurately, most of the story of Jonah, using similarly colorful language. But you could tell as he told it that he felt a real calling from the Lord to preach about repentance and righteousness. He feels compelled to preach and reverence God by his seemingly odd calisthenics. 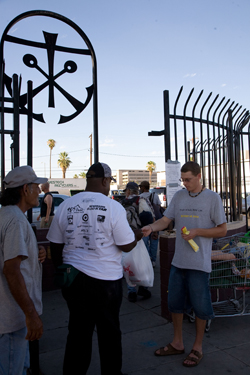 I recently spoke with Neil outside our back gate on a quiet afternoon. He asked me whether I felt called and asked, "If God called you to do something, what would you do?" I felt awkward and taken aback. I do feel called by God to be a priest. I feel like I am answering that call. Neil sometimes has said something to me indicating that he knows this and sees it in me, which left me wondering why he still felt like he had to ask. Am I not showing it enough?

Neil started sharing with me how he feels called. He does what he does because God (down to both knees, then back up) calls him. He said that he knows that some people feel he's crazy – at which point two men walk past us. They both take turns saying to Neil "God bless you," and each time Neil goes back down to his knees.

As they then say, "God bless you, too, pastor" – and Neil goes back down to his knees at the Lord's name – I ask myself whether these men are serious in their blessing or just trying to get him to go to his knees again. Neil continues, undistracted, about feeling called and so it does not matter what other people think. We have to follow what the Lord asks us to do.

This man's zeal for the Lord surpasses mine. As has happened several times before, I think of Ezekiel or some of the other prophets. I remembered when I first read full chapters of the books of the prophets in the Bible and being blown away. The pieces we get in the Lectionary never really communicate to me how crazy and outlandish the things are that God asked the prophets to do: dig a hole in the wall of your house and crawl through it (Ez 12), take a prostitute for your wife to prove a point (Hos 1), walk around with a yoke on your shoulders (Jer 28), etc. How quickly do I judge others who act out of the ordinary? Does God have a message from them for me?

As I thought about his zeal and passion for the Lord, Neil asked me to pray for him. I felt that I needed him to pray for me in my too frequent hesitation in my faith. Yet he asked me to pray for him. After we prayed, he offered me his burrito. He asked if I would take it – and if I was not going to eat it, to give it to someone who would. We strayed from the burrito as a topic for a bit until the conversation ended. He then asked whether I was really going to take the burrito or not.

I asked if he will have what he needs for the night if I did, and he said that he trusted the Lord and knew he had what he needed. I then said, "If you are offering, then I will accept."

"Accept it then," he said as he placed it more securely in my hands.

I went in the building, and he continued down the street. Inside I told the story and shared Neil's burrito. It was the best cold green chile burrito I have ever had.

Fr. Eric Schimmel, C.S.C., is the Director of André House of Hospitality in Phoenix, Arizona. He is in his second year as a monthly contributor to the Spes Unica blog. Learn more about the missionary work of Holy Cross priests and brothers to extend the Good News of Jesus Christ across "borders of every sort."