A Visit to Our Lady's House

A Visit to Our Lady's House 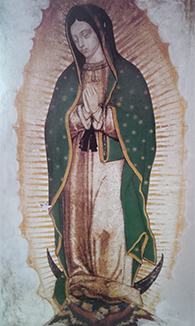 It was after a weekday Mass celebrated for thousands of pilgrims that I found myself behind the high altar of Our Lady of Guadalupe. After a series of miracles that had connected us with the right priest, at the right time, on the right day, our small group found itself blessed to be led by one of the canons who then gave us the rare opportunity to stand only a few feet from the precious image drawn by God's own hand. Even after having the experience of serving at Her altar, this moment immediately overshadowed that.

Words fail to describe the emotions that ran through my mind as I found myself before the Mother of God. Before me was a queen of supreme beauty and power who looked on me with eyes of tender motherly love. She was my mother, and the prayers of a little child were my soul's only response. Her maternal love, her loving gaze, her constant presence is her gift to my people. Standing there, I could only be thankful to be her little son, someone that has flourished through the joys and hardships of life, with the confidence that my mother has always been by my side.

After an encounter with Mary, one begins to see life in a different way. My weeklong visit to Mexico City brought me into contact with people of every social class, from all around the country, each a unique treasure in the eyes of God. It is easier to see Christ in His brothers and sisters after seeing their Mother who had cared for them. 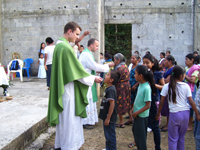 Walking through the crowded streets, one sees Christ the hungry, the beggar, the naked, on the faces that are too often ignored, passed by, and rejected. One also encounters Christ the Consoler, the Healer, and the Friend in those that do reach out to their neighbors. On one such street I will never forget the sight of a Franciscan Sister giving food to a beggar. Christ feeding Christ. There was the Gospel message being lived. It was a living Mass; the Body of Christ, feeding the Body of Christ to the Body of Christ. This reality was present in the streets.

The week which passed by too quickly flooded the senses with constant beauty. Mexico City and the surrounding area can only be described as rich. Not in the material sense but in color, music, taste, history, and faith. Its people, many of whom live in abysmal poverty, are rich in cultural, familial, and spiritual treasures. One feels God in the midst of the city, not just in the beauty of the Baroque churches and ornate temples, but everywhere. The yearning for a higher Truth moved my ancestors to build pyramids to the gods that were only a shadow of the coming Messiah. The floating gardens of Xochimilco reminded one of the beauty of Creation and the enriching effect it has on the family. As we passed by on our boat, we saw extended families celebrating, eating, singing, dancing, and just being together. The Ciudadela, a massive outdoor market, was a place in stark contrast to our conceptions of shopping centers. Everywhere the shopkeepers freely interacted with each other and their customers, in a relaxed atmosphere more akin to friendly cooperation than fierce competition. 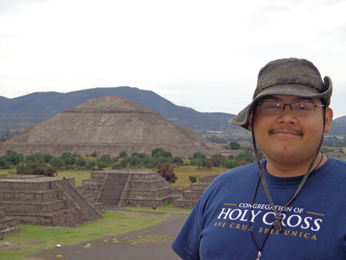 Finally the warm greetings we received everywhere left the strongest impressions. Those who had been strangers found the generosity to welcome us into their family. Without cost to us, they treated us to dinner while serving us like kings. Our gathering one evening expanded as friends from the neighborhood stopped by to join in and share what they had, whether it be food, drink, or music.

Being back in my Motherland gave me a new perspective of the whole Christian person. It reminds me that there is never a black and white reality, and that in life, one cannot just compartmentalize beliefs to one hour on Sunday or in private prayer. Sinners are also becoming Saints, and even the lowly offer their gifts to the Father. Going back to Guadalupe at one of the many daily pilgrimages to the Basilica, floats were paraded in, overflowing with flowers of every kind imaginable. There were shopkeepers and workers of the local flower market, expressing their gratitude for the blessings of the previous year. In the Mass, immediately following the pilgrimages, eight couples were married in the presence of their loved ones and before total strangers who joined in the prayers of the families, to pray for the newlyweds. This was a microcosm of the Church. We saw here in Mary's little home how we are connected to each other. Through our Baptisms we are all called to bring the whole of our lives as a thanksgiving offering to the Lord. Within the Church we are brothers and sisters to each other in our mutual love of Him who loved us first. We here are able to appreciate the amazing gift of ourselves and others in witnessing the total self-offering of our lives to the Lord.

Felipe Campos Resendez is a postulant at Moreau Seminary, and is a 2013 Notre Dame graduate. He is originally from Monterrey, Nuevo León, Mexico