A Year of Firsts

A Year of Firsts

A couple of weeks ago, on the first Sunday of Advent, I entered the sacristy here at St. Joseph Parish about 20 minutes before the Saturday Vigil was scheduled to start.I was approached by several people asking how to do things at the Mass, and what is different as we began the Season of Advent. I looked at those who were asking and I said, "I have no idea.I've never done this before."Eventually, we figured it out thanks to our pastor, Fr. Kevin Russeau, C.S.C.,and our Liturgist.

This first year as a priest has been an amazing experience filled with many challenges and blessings.As the months started to pass by, Icelebrated many "Firsts."My First Mass at the Basilica of the Sacred Heart at Notre Dame the day after I was ordained.The First time I heard Confessions, after returning to Texas after my Ordination, was a beautiful and privileged experience. My First Wedding Mass celebrated at St. Ignatius Martyr Catholic Church in Austin, TX. My first Baptism as a priest also celebrated at St. Ignatius. I celebrated my First Funeral Mass after I arrived in South Bend at St. Joseph in late July, and I concelebrated my First Holy Cross Funeral later in August.There were many "Firsts" throughout my First year as a Holy Cross priest. 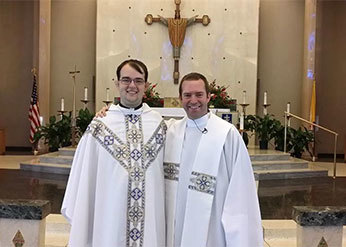 After a certain period of time, I started to not think about having more "Firsts" as a priest.This "First" Advent as a priest snuck up on me. Not that I didn't see it coming, but it wasn't really until the ministers in the sacristy asked me about what to do for the first Sunday of Advent that I considered that it was actually the First time I'd be celebrating Mass in Advent as a priest!Just a few short weeks later, I also celebrated my First Christmas Mass! What a wonderful vocation to be able to live as a Holy Cross Priest and to celebrate these beautiful moments of God's grace with the people of God!I look forward to a few more "Firsts" in the coming months as we approach Lent, Easter and the Holy Cross Priesthood Ordinations of my brothers, Deacon Matt Hovde C.S.C. and Deacon Dennis Strach C.S.C.

Fr. Dan Ponisciak, C.S.C., took his Final Vows with the Congregation of Holy Cross in the fall of 2014, and was ordained a priest in the spring of 2015.He was assigned to St. Ignatius Catholic Parish in Austin, Texas during his transitional Diaconate.He was recently re-assigned to St. Joseph Parish in South Bend, Indiana.Fr. Dan is originally from Philadelphia, Pennsylvania.