An Ivy League Catholic: Into the Belly of the Beast

An Ivy League Catholic: Into the Belly of the Beast 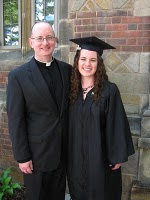 This September, Fr. Peter Walsh, C.S.C., began his fifth year as assistant chaplain at Saint Thomas More, the Catholic Chapel at Yale University. In his monthly blog post, he will share his adventures as an educator in the faith at one of the world's premier universities. Today he underscores the importance of Catholic faith formation at secular universities to form tomorrow's leaders.

Four years ago, when I told one of my cousins that I was going to be working in campus ministry at Yale, he said "Peter, you're going to the belly of the beast!" Perhaps he had William F. Buckley's book God and Man at Yale in mind, in which the noted Catholic Yalie criticized the university's anti-religious atmosphere. More likely, my cousin was influenced by a generation of Boston Irish and their mistrust of the Ivies. My experience could not be more different! Catholic life at Yale is flourishing and the university administration is very supportive of the religious life of their students.

When Father T. Lawrason Riggs, the founder of the chapel, graduated from Yale College in 1910, he was one of eight Catholics in his class. This year, twenty six percent of incoming freshmen who elect to fill out a religious preference card identify themselves as Catholic. Those numbers don't begin to describe the vibrancy of the Catholic community at Yale. I hope to attempt to do so over the coming months in these blog posts. What the numbers do illustrate is the swelling population of Catholic college students in non-Catholic institutions. Catholic Campus Ministry Association reports that up to ninety percent of Catholic college students attend non-Catholic colleges and universities. It is a bit daunting to realize that the majority of future Catholic leaders in society and the Church will come from programs like ours, making faith formation and leadership development a priority.

As a Holy Cross priest, I feel I have a foot in both worlds, since our religious community has such a strong commitment to Catholic higher education. As an "educator in the faith," I enjoy sharing that rich Holy Cross tradition with students at Yale. A couple of years ago, students here were very excited to celebrate the beatification of Blessed Basil Moreau with Holy Cross priests and brothers from around Connecticut and plans are in the works for the canonization of Blessed Andre Bessette next month. Since so many bright Notre Dame alums find their way to Yale for graduate and professional studies, frequent Fighting Irish game watches occur in our student center. 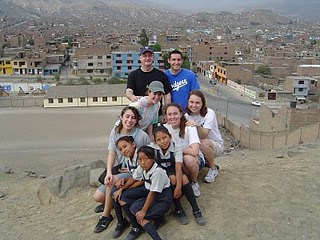 My favorite experience of networking Holy Cross and Yale took place a couple of years ago when the Holy Cross community in Canto Grande, Peru hosted a dozen students for Alternative Spring Break. We volunteered in two ministries of Lord of Hope parish in Canto Grande: Fe y Alegria, a school that educates over 2,000 children, and Yancana Huasy, which provides physical and occupational therapy to children with disabilities. As one Yale Divinity School student wrote, "the experience of visiting the poorer parts of a developing nation offered me insight into a new culture and our own society. Life certainly is harder down there, but the joy and vibrancy I saw in the faces of the children with whom I played on the dusty playground told stories of hope and joy. In terms of our own culture, I see our excess and I struggle to understand how there can be such disparity among peoples." Our students came away not only with a better appreciation of the Church's mission to promote human dignity and social justice, but also what their own role in that mission can be.