Asking for God's Strength and Grace

Asking for God's Strength and Grace

Tonight, in preparation for Matt's Ordination, Fr. Gerry Olinger, C.S.C., presided over Lucernarium. He shared his homily with us. Fr. Gerry was ordained in 2010 and serves at the University of Portland as the Vice President of Student Affairs and Assistant Vocation Director.

If you ask a Holy Cross Priest about the most memorable parts of his Ordination, I would venture that, at some point, he would talk about lying prostrate on the floor of the Basilica. I can still remember what it felt like to lie down in the main aisle of the church, my heart thumping in my chest, as the choir began singing the Litany of the Saints. It is a gesture that is packed with meaning—a gesture that calls together the prayers of those gathered in the Basilica as well as those who have gone before us in the faith; a gesture that speaks of a person's complete unworthiness for the ministry that he is entering into and the need for God's assistance in his work; and finally a gesture that speaks about the role of the priest as a servant—as one who lays down his life for those he serves. 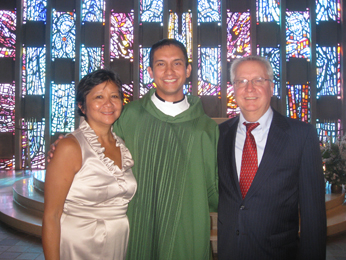 While Matt is the one who is being ordained tomorrow, we know that he has not traveled this road alone. In reality, there were a lot of people involved in his preparation and support. The presence of so many people here tonight and all of the people who will attend tomorrow's Ordination is a wonderful representation of the breadth of people involved in such a moment. It began with Matt's parents who first introduced him to the faith—who taught him how to pray and to value the tradition that he was raised in. I know firsthand the influence that Matt's parents and his sisters have been on him. Paul and Pam, it is because of your faith, because of your dedication and good example, that Matt has the courage to make this remarkable step tomorrow.

Matt's friends have also been essential in this process—helping him to know the love of God through the love and support that they showed to him. Finally, the Holy Cross community has played a critical role in this day. Holy Cross has provided Matt with brotherhood and support and has helped to form and prepare him for the life of service he is entering into. It is a beautiful reality that the voices of all these people will blend together into one voice tomorrow during the signing of the Litany. Matt, as you lay prostrate on the floor of the Basilica, it will be all of these voices that will be there praying for you as you prepare to be ordained. Draw strength from this reality and allow it to serve as a support for you. 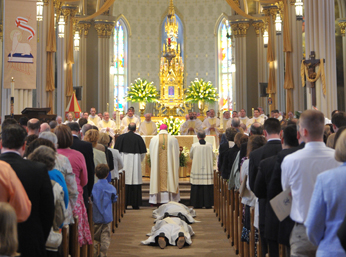 During this moment of the Ordination, we also call down the prayers of those who have gone before us in the faith—the holy men and women who are declared saints by the Church and those not officially recognized but who are members of the Communion nonetheless. It is sometimes easy to forget that we are part of something much larger than ourselves. But this moment of the Ordination liturgy is a reminder of this fact. Matt, tomorrow you will not only be connected to the Church here on earth—but to the Church that has existed throughout history. Tomorrow, you will follow in the footsteps of many who have gone before you, men in Holy Cross and others who have walked this way before. Their example and their prayers are with you as you begin your own life as a priest. Every day of your priesthood, you will call upon the Saints as you celebrate Mass. Trust that they will continue to serve as an example and source of strength for you. 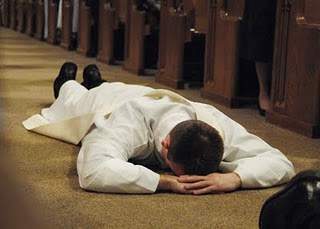 Lying prostrate is also a sign of our limitations as human beings—a reminder that we cannot do the work that we are called to on our own. As we look at our lives, we realize that we are limited people; we are prone to weakness and failings. We learn over time that we have it within ourselves to hold back. Matt, I imagine that some doubts might be swirling around in your mind. You might worry that you are not worthy to live the life that God is calling you to—that there is no way you can do this on your own. The gesture of lying prostrate is an acknowledgment of this fact. When you lie down on the floor of the Basilica, Matt, it is a sign of your own unworthiness—but also a sign of your openness to God's grace. You are asking God to give you the strength to live the life that He is calling you to.

This is something we see throughout the history of the Church. Think of the Apostles, who continuously found themselves falling short, catching a glimmer of the truth but also getting it wrong most of the time. Their failure was seen most clearly when they abandoned Christ in His time of most need—when they ran from the Cross in order to avoid His apparent failure. And yet, it was in their moment of greatest failure—when they were huddled away alone in the upper room—that Christ entered into the room and into their lives. It was then that Christ breathed His Spirit upon them and gave them the strength to go out and proclaim the Gospel and even die for His sake. The Holy Spirit allowed them to overcome their failures and their limitations and to become true disciples. 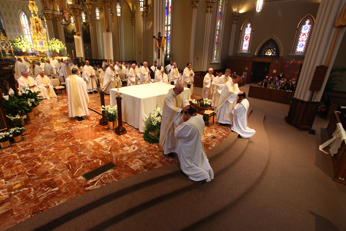 Matt, lying on the floor of the Basilica is the opportunity to acknowledge your own need for God—to call on His strength as you begin your life as a priest. As you stand up after the litany and proceed to the sanctuary for the laying-on of hands, know that the power of the Holy Spirit will descend upon you. That the same Spirit that enlivened the hearts of the Apostles will come to rest in your heart—giving you the strength to overcome your limitations and to preach the Good News of the Gospel. The Holy Spirit enables you to serve God fully and worthily as a priest.

Finally, the gesture of lying prostrate is a powerful sign of the true nature of priesthood. A priest is someone who lays down his life in service to others and our model for the priesthood is Christ the High Priest. In his letter to the Philippians tonight, St. Paul speaks about the love that Christ showed through his death on the Cross. Although Jesus was of the same nature as the Father, he humbled himself and gave himself over to death for our sake. It was a love that was completely self-giving—a love that was focused on others. And it was through this self-gift that Jesus brought salvation to the world. 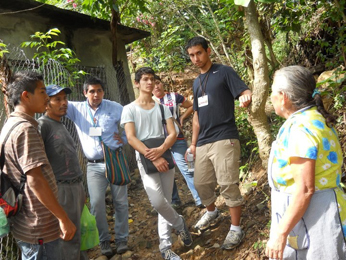 Matt, as a priest you are called to that same love. You do not claim your life as your own, but rather willingly hand it over to others. There is much that is demanded of you in this life. You have already seen this in your year as a deacon in Monterrey—in serving the people there with great zeal and dedication. But there is also a transformation that comes about in living your life for others—in turning your life over to God.

And this service—this laying down of your life for others—is manifested in a concrete way in the celebration of the Eucharist. Matt, through your ordination, Christ consecrates you to God forever, so that you can offer men and women a service that comes from God and leads to Him. This is the profound gift that you offer to the people that you serve. Every time that you celebrate the Mass as a priest, you help people to participate in that once and only sacrifice of Christ on the Cross. You lead people to that gift that Christ offers to the entire world, and you do so because you yourself have followed His example and have laid down your life for the sake of your sisters and brothers.

Matt, as you lie prostrate on the floor of the Basilica tomorrow, know that all of our voices will be joined together in prayer for you. Know that, despite your limitations, God is working in you—giving you the gift of His Spirit so that you can carry out the work that you are called to do. Finally, know that there is great joy in the life that you are being called to. Trust that it is in service to God's people—in laying down your life and following the example of Christ—that you help people experience new life in Christ.

Matt, may God bless you and bring to completion the good work that He has begun in you.