At the Threshold of Heaven

At the Threshold of Heaven

Those of you who have visited Moreau Seminary already, set on the northern shore of St. Joseph’s Lake across from the Golden Dome, don’t need me to tell you that the Sacred Heart Chapel is one of the best-kept secrets on this campus. The entire wall behind the sanctuary is made of a massive stained glass window designed by the late Fr. Anthony Lauck, CSC, who also resided at Moreau. 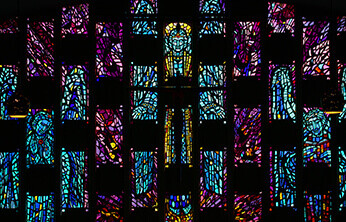 This two-story-high window depicts five angels, and gives the impression of being part window, part mosaic, because the glass is in irregular, relatively small chunks. St. Michael the Archangel is in the center, directly behind the crucifix and the main altar. Michael could be comforting Christ on the Cross, or standing in adoration of His majesty even as the soldiers and crowd mock Him. On Michael’s right is St. Raphael, who is depicted as praying or glorifying God, and on his left is St. Gabriel, who is reading from a sacred text, which may be a reference to the message he announced to the Blessed Virgin.

The Archangels are flanked by two unnamed angels, on Michael’s far right is the Angel of Judgment, blowing a trumpet, and on the far left is the Angel of the Apocalypse holding a golden thurible filled with incense and the prayers of the holy ones. When you sit in this chapel, especially when you are in the front row or in the sanctuary itself, those angels tower over you, they almost lean out above you like a wave about to crash on top of you.

It has always impressed me that the massive, unpolished Carrara marble altar that dominates the space, was built with liturgical “East-West symmetry,” meaning that it is centered on its platform.  There was no “need” to move the altar after Vatican II so that Mass could be celebrated facing the assembly—there is just as much space in front of the altar as there is behind it. This makes the Moreau chapel a particularly powerful place in which to learn to serve, lector, preach, and preside at Mass or other liturgies. 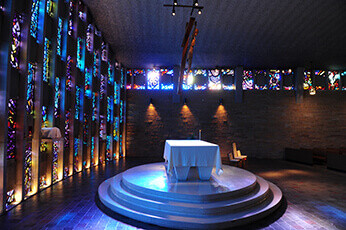 When you sit in the pews facing the window, or when you celebrate a rite or liturgy, like in adoration, facing “forwards,” there is a sense that those great angels are leaning in to pray with you…or in a very humbling sense, that they may not be at all concerned about you puny humans who happen to be present because they, too, are focused on their adoration.  The window aids in this impression because most of the lines that hold the pieces of glass together draw subtly stream away from the focal point atop the altar and from the tabernacle. There is a sense of great energy and powerful movement streaming, exploding out from the altar, and from the tabernacle that preserves the Presence of the mystery celebrated there.

I have often thought about the imagery of angels in the churches I have visited. My home parish, St. Patrick’s in Parsons, Kansas, has angels molded onto the altar, and had angel-lampstands flanking the tabernacle. Many, many churches have scores of cherubim peeking from the edges of paintings and the corners of arches, or strewn among the golden stars on the ceiling. We are so used to seeing them that, for me at least, sometimes they don’t even register. There is nothing subtle, however, about Fr. Lauck’s angels at Moreau, and their presence demands something of you when you pray there. But they are, of course, still just glass, and even this great work of art is a miniscule impression of the Beings it represents. The Angels are present at every Mass, art or no; they guard every tabernacle, whether any human is present or not; they surround every one of us at every moment of our lives, but they tend to be so gentle that, like plaster cherubs, we can forget they are there. But they are always there, leaning over us and encouraging us to recall the dignity of the worship we undertake, the dignity of the world formed by God’s hand, and the dignity of our neighbors, and ourselves, formed in His own Image.

Facing into those windows reminds you that this spiritual reality is present all around us if we could just keep it in mind, and evokes the terrible, ecstatic truth that, any moment now, the real Angel of Judgment may blow his trumpet and that wave of angels will finally break over us and over our world and wash it clean for the final time. 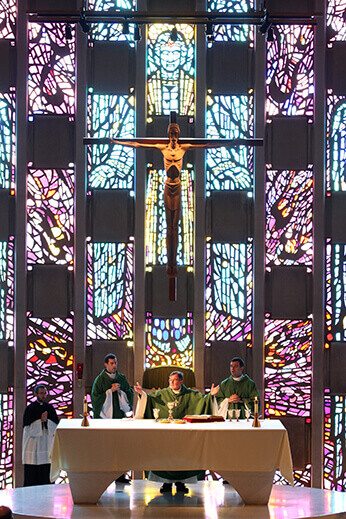 When you move into Moreau as a seminarian or brother candidate, you soon partake of the honor of beginning to serve at that altar for Mass and to read and even preach from that sanctuary for the Liturgy of the Hours. At those times you face the assembly, you face your brothers in formation and the seminary staff who forms you, and with the angels you look out at family members, friends, classmates, and guests who come to visit you. To be “on the side of the angels” in this way can give you a powerful sense of joy and urgency, to let everyone you can hear the Good News that this new reality is coming quickly, and in so many ways is already here.

As the Apostles rushed out from Jerusalem to every corner of the earth, as the disciples rushed out to fill their communities with charity and mercy, as those lines stream out from the center of the altar in this window, you have the sense that you can almost see the Holy Spirit’s movement, the way that swaying trees show you the power of a coming storm. Standing in the sanctuary you can almost feel a tailwind blowing, ready to fill the sails of anyone willing to say “yes” to this mission.

I am so grateful that this chapel, around this great altar and before this great window, is the place we prepare the men of our Province to go out into ministry after their time in initial formation and temporary vows is. They, too, will rush out from this place with joy to spread the Gospel and remind others, as these angels do, of the sacred presence that always lies just beyond the reach of our mortal sight. As members of the Holy Cross family, we have the joyful duty to proclaim that just beyond our sight, just beyond our suffering, just barely past the Cross, is the dawn from on high is about to break upon us.

Fr. Jarrod Waugh, CSC, is the Associate Director of the Office of Vocations for the U.S. Province of Priests and Brothers. He was ordained in 2013 and currently resides in Dillon Hall, on the campus of the University of Notre Dame.