Along with my three ordination classmates, Frs. Greg Haake, C.S.C., Stephen Koeth, C.S.C., and Jim Gallagher, C.S.C., I have been attending the Early Years' Workshop at our retreat center in LaPorte, Ind., for the past 5 years. While the title seems rather formal, it is better known as "Baby Priest's Camp" (BPC). Now that has a ring to it! 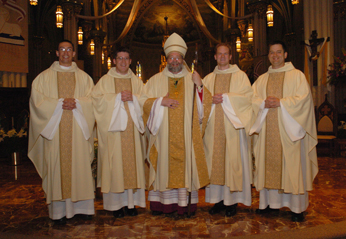 The rationale behind BPC is as follows: "The first five years of ordained ministry are very important. They set the pace for the years that stretch ahead. They also lay a foundation for the future and provide a point of reference across a lifetime of priestly ministry." Any priest ordained less than five years in the United States Province is expected to attend this conference organized by the Holy Cross community. This year we had 14 religious from all over the United States and Mexico. 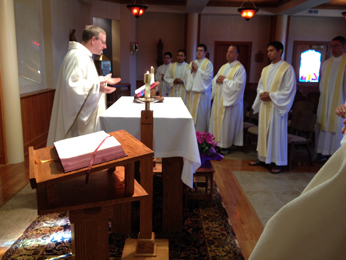 Our time together, which started Monday (June 4) and ran through Thursday afternoon (June 7), began with evening prayer and concluded with Mass. Throughout the course of our time together there were moments for personal reflection, prayer, Mass, learning, and good old fashioned fun. Before I get to the fun, here are some examples of the different sessions we attended:

Sharing Life and Ministry – We reflected upon our own respective ministries and life within the Congregation. 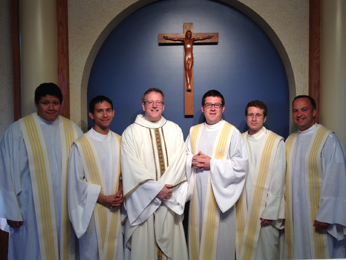 Conversation with Fr. David Tyson, C.S.C. – Fr. Tyson reflected upon his past nine years of serving as the Provincial Superior of the U.S. Province and what challenges face the Congregation in the coming years.

In addition to these sessions, we also had the opportunity to simply enjoy each other's company. Given the fact that most of us are spread throughout the country at our various apostolates, it is a joy for me to be reunited with my brothers in Holy Cross. Despite losing several hands of Euchre, I'm always humbled to be in the presence of people who have given their lives to God in such a remarkable way. Being with these holy men inspires me to live my life in a way that reflects my commitment to Christ and desire to make him known to others.

On the feast of St. Norbert we heard a reading from 2 Timothy during Mass. This passage, which calls us to "stir into flame the gift of God that you have through the imposition of my hands", served as a wonderful reminder of what we are called to do as religious of Holy Cross. I'm so thankful for my vocation and those of my fellow Holy Cross priests.

Fr. Pete McCormick, C.S.C., took Final Vows in the Congregation of Holy Cross on August 26, 2006, and then was ordained a priest on April 14, 2007. For the past five years, he has been the Rector of Keough Hall at the University of Notre Dame, while also serving in other capacities on campus from leading freshmen retreats to being the chaplain for the men's basketball team. He and his classmates graduated from Baby Priest Camp this year. Learn more about the priesthood in the Congregation of Holy Cross.