At the beginning of my sophomore year in the Old College Undergraduate Seminary Program at Notre Dame a question of discernment arose for me. It had occurred to me while I was working that previous summer and talked with a few priests about their own vocation stories. At that time having witnessed religious brothers in community and been taught by a few of them in my first year of college, I felt a bit of an affinity for them, and thought that it was something that called to me slightly. At that time I was not too sure what it was about the vocation to the religious life of a brother that called to me. In mentioning it to my formation staff I was encouraged to take it to prayer and discernment, as well as engaging in conversation with Br. Edward Luther, C.S.C., who was and still is on Old College's formation staff. With time it seemed to pass from my prayer life and train of thought, so that I found myself firmly committed to the priestly program of formation in Old College. However, this question of society (brothers and priests) within religious life was far from over. 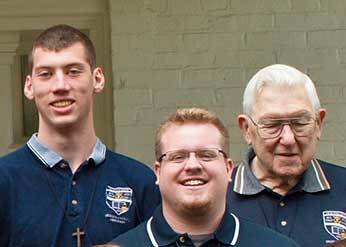 In the following years, through formation as well as regular spiritual direction, I found the question of the life of a brother arising again and again within my prayer and reflection. Within the context of formation I addressed it a few more times, but never found within it a need to take action beyond prayer. For the longest time in discussing it with brothers in Holy Cross I was asked often: What kind of ministry was I good at or would I want to pursue if I were a brother? This was a problem for me, for apart from the sacramental identity of a priest, what would be my purpose, my passion in ministry? I was also concerned about not having many age peers who were pursuing the brothers' vocation, and this led me to a resurgence of focus on the priestly society during my junior and senior years of college, as well as in the Postulant program at Moreau Seminary. Once again the question was taken to prayer and reflection, but once again it faded from my purview with time.

Going to the Novitiate in the late summer of 2013, the call to brotherhood remained with me but it quickly became clear to me that my Novitiate would be a place to discern religious life on a foundational level with Holy Cross, rather than discernment on the different societies. On August 2, 2014 I professed First Vows with the Congregation of Holy Cross as a seminarian within the priestly society. I do not regret my profession of vows on the priestly track, as at that point I still felt called to priesthood. 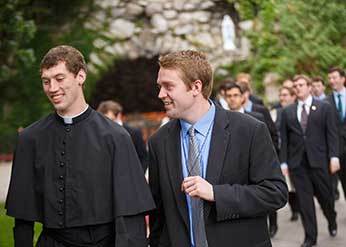 In my first year of theology the question of societies quickly returned as I was reminded that it was a question that I had taken to prayer and reflection in the past. This time I found it staying with me and it did not go way.

There were a variety of reasons for this. Going through formation, my spiritual director and I had both identified that I needed to work on a cultivation of desire to celebrate the sacraments. While I have always looked forward to the reception of the sacraments, I have never discovered within myself the desire to celebrate them. Thus for a long time, even throughout my novitiate year in Colorado I found myself praying daily to St. Joseph, using a prayer from our Directory of Prayer, for the grace to develop a desire to preside at the sacraments. That prayer was never answered, at least not along the lines of a priestly vocation. Another reason had to do with ministry. For the longest time I could not discern what sort of ministry I most desired to do, but with the conclusion of my senior year, I soon came to the realization that I really enjoyed and was passionate about working within the ministry of special education, especially with young people. 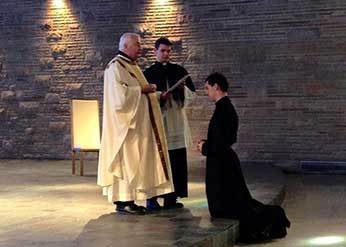 Finally over Christmas break at home and getting ready to return to Moreau Seminary, these two reasons clearly clicked together within me during prayer and I felt a new confidence. A call to brotherhood with the Congregation of Holy Cross. Still there was time taken to not leap into something, but finally toward the end of February I petitioned to switch societies within the United States Province of Priests and Brothers of the Congregation of Holy Cross. Officially I received word on the 14th of April that my petition had been accepted by both the U.S. Province Provincial as well as the Superior General of Holy Cross. It was a joyous feeling then but it was even more joyous when on Thursday the 4th of May, I received a special blessing during our community night Mass. It was especially powerful in that my parents and two youngest siblings were present and able to see how affirming and excited the community was for me. With the generous support of my classmates, my community, my formators, my family and friends, and priests and brothers throughout the Holy Cross community I find myself ready to embrace my vocation though I am unsure of what exactly the future may hold. 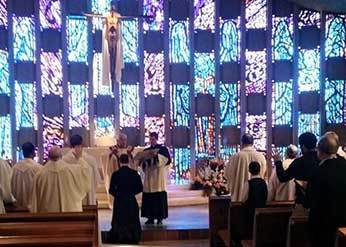 Next year, at least, is set as I will continue with a second year of Theology at Notre Dame and will live at Moreau Seminary. After that I, with the help of the community, will discern where to go next. Please continue to pray for vocations to the religious life, that more men and women may answer God's call to become priests, sisters, and brothers in Holy Cross.

Br. Joseph DeAgostino entered the Old College Undergraduate Seminary Program in the Fall of 2009. He completed his undergraduate studies, and entered the Holy Cross Novitiate in the summer of 2013. On April 14, 2015 Joe's petition to change from the priests society to the brothers society within the Congregration of Holy Cross, United States Province was joyfully accepted by the community. Br. Joseph is originally from Jerome, Michigan.