Matthew, David, Timothy, Stephen, Daniel, and Christopher, may you accept with joy and gratitude the love the Lord feels for you and pours into your lives today as you are ordained deacons. Today is a day of joy for you, your parents, your families and friends, and for your religious family, the Congregation of Holy Cross. It is a day of rejoicing for me as a bishop and for the whole Church. We rejoice that today God's grace of Holy Orders will make you servants in ministry to the Church. 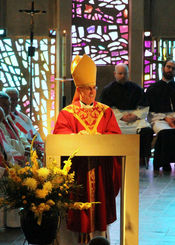 It is a privilege to ordain you permanent deacons. No, I didn't make a mistake. Don't worry: you are scheduled to be ordained priests next year by Bishop Jenky! But what happens today in the sacrament of Orders is not something transitional; it is permanent. All the priests gathered here are still deacons, because the character and grace of the diaconate is something permanent. Deacons are icons or images of Christ the Servant. The configuration to Christ the Servant through diaconal ordination is permanent. Priests are servants. Bishops are servants. That's why the Church requires us to be ordained deacons first. We don't leave one Order behind when we assume a different one. The sacramental effects of the three grades of Orders are cumulative, not exclusive. You won't be icons of Christ the Servant for just 7 months, but for the rest of your lives. No one is admitted to the higher degrees of Holy Orders without first being configured to Christ with the indelible character of the diaconate. When you are priests, the diaconal dimension of your ministry must also be visible. What is this dimension? It is the dimension of service, diakonia. I remember Pope Benedict once saying to a group of priests that "every priest also continues to be a deacon and must always be aware of this dimension, for the Lord Himself became our minister, our deacon. Recall the act of the washing of the feet, where it is explicitly shown thatthe Lord acts as a deacon and wants those who follow Him to be deacons and carry out this ministry for humanity, washing the feet of those entrusted to our care." So what happens to these six men today is important for the rest of their lives. 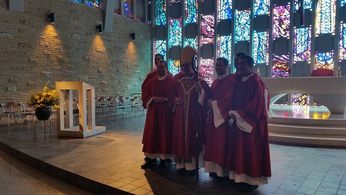 I invite our six candidates to think about the threefold ministry that is entrusted to them today. First, the diakonia of the liturgy. By ordination today, you will be made ministers of the altar. You will prepare the altar for the Eucharistic Sacrifice and you will give the Body and Blood of the Lord to His people. This is a beautiful service of the Church that contributes to the building up of the Body of Christ. It is truly an honor and a joy to be servants of the great mystery of faith, the Holy Eucharist. The Church asks you to always treat the holy mysteries with humility and devotion, with an interior adoration of mind and affection. And be especially eager to bring Holy Communion to the sick, the suffering, and the homebound. Go out and find those who are hungry for the Bread of Life, those who may be forgotten in nursing homes or other institutions. Be zealous to bring the Holy Eucharist to those who are alone and in need of company, your company as ministers of the Church, and especially the company of Jesus in the Blessed Sacrament.
You are also ordained today to exercise the diakonia of the word. This is the first duty of all the ordained, the first duty of priests and bishops as well. We share a common responsibility to proclaim and explain the Gospel. On this great Feast of the Holy Cross, we are reminded, as Saint Paul said, that we are not to proclaim ourselves. We are to proclaim Christ crucified. As members of the Congregation with the name "Holy Cross," you know this well. You are to proclaim and preach the greatest word that God has ever spoken to humanity through His only-begotten Son. What is that word? It is the word of the Cross! It is the word that your holy founder, Blessed Basil Moreau, proclaimed and lived. It is the word that all the ordained are to preach, the word that demonstrates how much God has loved the world. From the human point of view, Christ's offering of Himself on the Cross was 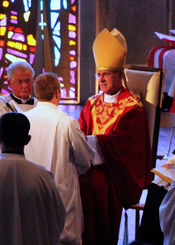 a sign of contradiction. The crucifixion was, in fact, the most profound humiliation possible. Saint Paul said that it was a stumbling block for Jews and foolishness in the eyes of the Gentiles, but for those who have eyes to see, it is the wisdom of God. It is the logic of God, the logic of love. That's the Gospel, my brothers, that you are called to preach, not your own wisdom, but the wisdom of God, the wisdom of the cross. We need apostolic stamina, Pope Francis says, "to endure all the difficulties inflicted by those whom (Saint) Paul describes as enemies of the Cross of Christ those people who like to be flattered and who like to be told what they like to hear; those people who want to be told what they want the Gospel to say and not what the Gospel says." We pray that you will have that apostolic stamina to preach the wisdom of the Cross and to teach the truth in charity. Through your preaching and teaching, you are called to lead people to grace, to an encounter with Christ. To do this task well, you must be men who contemplate the Gospel with love. You can't give what you don't have. I urge you as preachers to first linger over the pages of the Gospel and read them with your hearts as well as your minds. Prayer, spiritual reading, and meditation must be part of our daily routine as servants of the word of God. 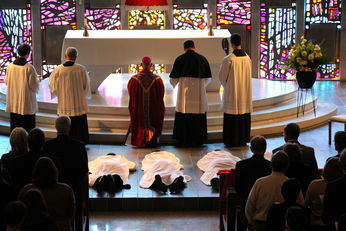 You are also ordained today for the diakonia of charity. The practice of charity has been part of the diaconal ministry from the beginning. The first deacons in the Acts of the Apostles were ordained to serve at table, to feed the poor widows. That ministry of charity, of course, expanded. We can think of the great charitable ministry of holy deacons like Saint Lawrence. This exercise of charity is an essential part of the mission of the Church. So, I encourage you to have a special love for the poor, the sick, and the suffering. Go out, as Pope Francis tells us, to the edges and peripheries, to the vulnerable and forgotten. Go out, like Jesus, who was always close to the poor and outcast. God's heart has a special place for the poor and so must our hearts. And think about these words of our Holy Father: "the worst discrimination which the poor suffer is the lack of spiritual care. The great majority of the poor have a special openness to the faith; they need God and we must not fail to offer them his friendship, his blessing, his word, the celebration of the sacraments and a journey of growth and maturity in the faith" (EG 200). May you have a particular love and concern for the most vulnerable in our midst: unborn children, the disabled, and the elderly. And remember also that besides material poverty, there is much spiritual and cultural poverty. The Lord calls us to continue His mission of bringing the good news to the poor, all the poor.
It is significant that these Holy Cross religious are ordained on the Feast of the Exaltation of the Holy Cross. We heard in today's Gospel part of the unusual conversation between Jesus and Nicodemus in John's Gospel. Jesus led Nicodemus to the very heart of the mystery revealed by God. It is the mystery of the Son of God who descended from heaven with a mission. That mission was to be lifted up, so that everyone who believes in him might have eternal life. Nicodemus knew the Scriptures well so he knew the passage Jesus was referring to when He spoke of the Son of Man being lifted up, like Moses lifted up the serpent in the desert. It was the story from our first reading today. The bronze serpent was mounted on a high pole so that the Israelites who had been bitten by the serpents with a poisonous venom, when they looked at the mounted bronze serpent, would be saved. Well, the human family at the beginning of history received a deadly bite from the ancient serpent, injected, so to speak, with Satanic venom, the venom of original sin. The human family has been burdened by sin ever since. There have been so many evils in the lives of individuals and communities just think of the Middle East today. But we live in hope because the Son of Man was lifted up, lifted up on the cross for our salvation. 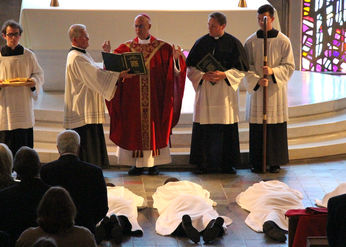 His love has saved us. This is the power of the Holy Cross.
In the disgrace of the Cross and the crucifixion, Christ received the greatest exaltation. As we heard in the second reading today, God raised Jesus up and gave Him the Name above every other name. In God's eyes, the Cross is the greatest triumph. The way of human judgment is very different, but God's judgment far surpasses ours. We exalt Christ and His Cross, the Cross by which God lifts up humanity and all creation, the Cross that heals us of the sin that poisoned humanity and all history. That's why the whole Church sings today: Ave crux, spes unica!
These men, about to become deacons, give their lives to Christ today because they believe in the power of the Holy Cross. They have been touched by Christ's love. They have been chosen by God to serve the Church and its mission of salvation. The mystery of the Cross will be at the center of their ministry. No human being was closer to that mystery than the woman who stood at the foot of the Cross on Calvary. We entrust these six men to the Blessed Virgin Mary, the perfect model of discipleship and service of the Church. Matthew, David, Timothy, Stephen, Daniel and Christopher, Mary is and always will be at your side with her motherly love and affection. With her help, may you be faithful, joyful, and holy servants, deacons, not just this year, but throughout your lives!

The Most ReverendKevin Rhoades, D.D., Bishop of the Diocese of Ft. Wayne-South Bend, presided over the Mass of Ordination to the Diaconate of our six new Holy Cross Deacons. Bishop Rhoades is originally from Lebanon, Pennsylvania. He has served as a parish priest for both English and Spanish-speaking communities, and was later an instructor, and then named Rector, of Mount Saint Mary's Seminary in Emmitsburg, Maryland. Bishop Rhoades was ordained to the episcopate in 2004 for the Diocese of Harrisburg and became the ninth Bishop of Fort Wayne-South Bend in 2009.