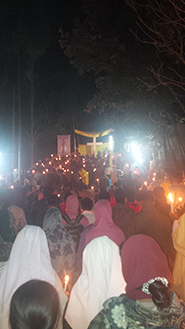 For years friends had been encouraging me to participate in the Marian pilgrimage and procession in Diang, in eastern Bangladesh, that happens each February. When I was able to schedule it in this year at the end of an extended mission trip that took me to far-flung Family Rosary missions in East Africa and Asia, I didn't realize how the event would be a great capstone of powerful experiences of the world today, of the place of the Church and Holy Cross within it.
Each year about 10,000 people make the long journey to Diang. Fr. Tom McDermott, C.S.C., a confrere in Bangladesh, says, "Bangladesh is a small country where everything is far!" People in America and Europe really can't imagine the traffic and the overall experience of this country. About the size of Wisconsin, its population is about half that of the US: people everywhere. Natural disasters that take the lives of hundreds of thousands seem to happen with regularity. In their War of Independence from Pakistan in 1971 six million people died in 9 months.
Holy Cross has shared that history since our first missionaries arrived in 1854, responding to a request by the Holy See to care for a difficult mission. Though only .6 % of the population of this very Muslim country is Christian, Holy Cross has had a noted impact, particularly because of our highly respected schools. 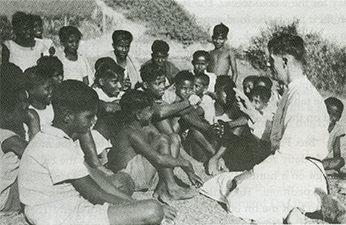 In 1932 the young Brother Flavian Laplante, C.S.C., arrived from Canada to join his life with that of the poorest of the poor in what was then called "East Bengal", part of British India. He died in Bangladesh in 1981 leaving a great testimony of holiness admired by people of all religions.
In his first years he demonstrated his dedication and talent working in Holy Cross schools in the Chittagong area. 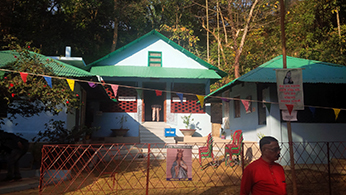 Then his love of the poor really started to shine through his relief work during famines of World War II caused by Japanese blockades that took the lives of about 1,400,000. After the war his vocation to serve among the fishermen took shape. They live a very poor and precarious existence and he became the organizer, advocate, educator, and holy man for hundreds of thousands of them, Christians, Hindus and Muslims alike. He often faced fierce opposition. He procured for the Congregation a sizeable piece of land in Diang which became the center of the varied educational and social services he founded - and the Ashram (hermitage). 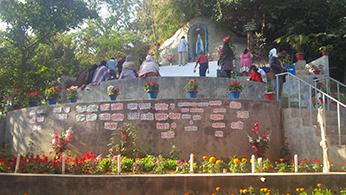 How could he find in his heart so much room for the suffering of so many? Visiting Diang and coming closer to the life and mission of Brother Flavian, I could see that, like our Founder, Blessed Basil Moreau, he was given the grace of both deep prayer and intense apostolic activity to an outstanding degree. He received great strength in prayer before the Blessed Sacrament. He became more and more committed to the life of a "Saddhu", a holy man, at the Ashram and for three years, until his death from stomach cancer, he lived as a hermit. He loved Our Lady deeply throughout his life. It wasn't long after establishing the Diang project that he built a grotto and enshrined our Blessed Mother, against the opposition of many. He began the custom of pilgrimage to her, especially in times of trouble, that continues, now stronger than ever. 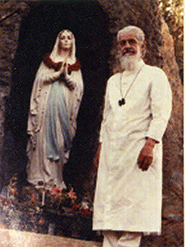 After two months of moving around Family Rosary works on three continents, visiting Holy Cross missions that serve some of the poorest and most marginalized in the world, I found myself there in Diang, with 10,000 others, coming to Mary. As the procession meandered in prayer on forest paths in the middle of night, I found myself recalling all I had seen of a world that is so complicated and riddled with suffering and injustice and I felt overwhelmed. My soul called out, asking our Mother Mary and inspired by Brother Flavian, for help that I might have a heart like theirs, so full of love of God and of the poor.
The Cause for the Beatification of Brother Flavian Laplante is well underway, so he is designated "Servant of God". Let us all pray that the Church recognize his holiness as a model for all!

Fr. Jim Phalan, C.S.C., is the Director of Family Rosary International, which is a part of Holy Cross Family Ministries. HCFM was founded by Servant of God Patrick Peyton, a Holy Cross priest who had a special devotion to the Blessed Mother and preached that the "family that prays together, stays together." Fr. Phalan will be writing for the Spes Unica Blog each month to share with us the great work of Family Rosary International, yet Family Ministries is one of the creative ways that Holy Cross continues to reach across borders of every sort to spread hope. Learn more about the missionary work of Holy Cross.