Brothers in Mission: Working Together to Serve the Lord.

Brothers in Mission: Working Together to Serve the Lord. 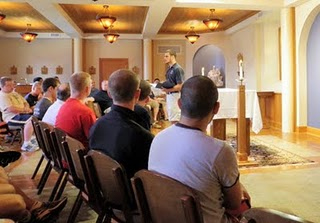 Today's blog post comes from Karl Romkema, one of the men in Old College. He just recently returned from a week of being co-mayor of camp and shares with us how Holy Cross begins the year of academics and formation.

For decades, it has been a Holy Cross tradition that the seminarians begin each year of studies with a "camp". During this time, seminarians at all levels of formation come together to pray, bond, and prepare for a year with one another in formation. Since 2005 this has taken place on a Holy Cross-owned property in LaPorte, Indiana.

The seminarians have recently returned from their week-long orientation in LaPorte. It was an excellent opportunity for the 40 of us men to get to know one another and catch up after a long summer of service and study. The theme for the week was "Brothers in Mission: Working Together to Serve the Lord." Throughout the week we sat in on talks given by esteemed guests in order to better understand brotherhood, mission, and how these can be achieved by a religious community in our times.

The first-year seminarians also participated in the traditional "liturgical orientation" in which they learned how to pray the Liturgy of the Hours throughout the course of the Liturgical Year. It was not all study, however we competed in friendly tournaments like bocce, fishing, volleyball, trivia, and Mid-Western favorites: euchre and "cornhole." In the evenings fires were built, guitars were played, and plenty of joy shared.

The week was fruitful and a great start to the academic year.