Can You Give Us a Blessing?

Can You Give Us a Blessing?

Last week, I was visiting one of our classrooms at St. Joseph Grade School and during the visit, one of the students asked if I could bless them. His question caused me to go back to a memory from when I was assigned to St. Ignatius Martyr Catholic Church in Austin, TX. At St. Ignatius, each day, Evening Prayer is celebrated in the chapel within our office building and usually a few laypeople join the prayer of the Holy Cross religious who pray in common there. 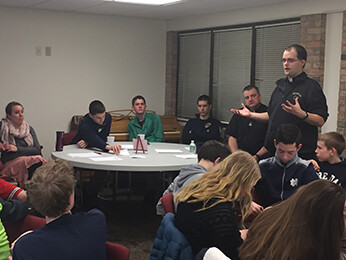 One of these laypeople at the time, was Caroline Smith, who is now known by her religious name, Sister Basil Marie. Sister Basil Marie is a Dominican novice with the Sisters of Mary Mother of the Eucharist in Ann Arbor, MI. Her religious name takes Basil from Blessed Basil Moreau, founder of Holy Cross.  After my Ordination to the Priesthood in April 2015, Sister Basil Marie, while present at St. Ignatius, would ask for a blessing as often as she could. A part of me didn’t understand this repeated request as I wasn’t raised in proximity to newly ordained men while growing up so the requests for blessings was somewhat surprising because I had not encountered that prior to entering the Congregation. But each time she asked, I began to understand that it certainly wasn’t about me, but rather it was the blessing of God – Father, Son and Holy Spirit – that she longed for. As she continued to discern her own vocation with the Dominicans, her faith continued to inspire me as I prayed through my re-assignment to a new community of faith in South Bend at St. Joseph Parish.

Each blessing that I give is a precious moment of God’s grace. The reason I was in the third grade class last week when the student asked if I could bless them was because I was invited by their teacher, Mrs. Sherwood, to bless a rosary and a medal. But, as we tried to schedule a time to do the blessing, I thought that it was important for our students to be involved in other forms of prayer in addition to Mass each week. I decided to involve the students in the blessing by doing it in their classroom so they could be a part of it. It was a beautiful teachable moment to pray with 25 third graders by using a rite that most had never experienced.  And then at the end, I blessed the students gathered there. 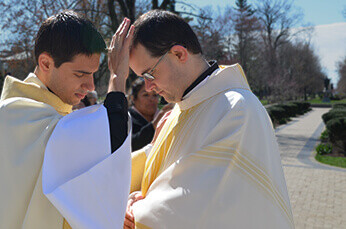 We are truly blessed here at St. Joseph to be able to minister to amazing children through our parish grade school. Who knows what the future holds for many of these children? But, keeping them close to the rituals of the Church is important to continue to help them grow into the people God is calling them to be. Sister Basil Marie is a wonderful example of staying close to the Lord and answering His call when called upon.

Fr. Dan Ponisciak, C.S.C., took his Final Vows with the Congregation of Holy Cross in the fall of 2014, and was ordained a priest in the spring of 2015. He earned an M.Ed. from the College of William & Mary prior to completing his M.Div. from the University of Notre Dame. He currently serves as Parochial Vicar at St. Joseph Parish in South Bend, Indiana. Fr. Dan is originally from Philadelphia, Pennsylvania.