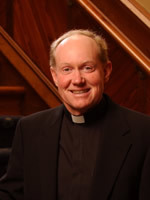 From our founding, the Congregation of Holy Cross has been committed to Catholic Education as an essential part of the Church's mission of spreading the Good News and establishing God's Kingdom in this world. To mark Catholic Schools Week this year, we have a series of posts highlighting the work of Holy Cross in this important mission field. We begin with one of the great educators in the faith in Holy Cross today, Fr. Timothy Scully, C.S.C., the director of Notre Dame's pioneering Institute for Educational Initiatives. He lays out for us the challenge, but also the hope of Catholic Education today … as well as a little preview of what Holy Cross is doing to help bring about that hope.

One of the central charisms of Holy Cross is to be "men with hope to bring." Nowhere has this been more true in my own life as a Holy Cross priest than in Holy Cross' commitment to Catholic education, which we celebrate during this Catholic Schools Week.

In this work, we in Holy Cross – indeed, Catholic educators everywhere – follow in the footsteps of superheroic men and women, who dedicated their lives to establishing the system of Catholic schools that has given so much hope to our nation. The American Catholic school system, developed by immigrant communities – including Holy Cross priests, brothers, and sisters throughout the country – was a vision of hope. Like the students we serve today, yesterday's immigrants were generally poor and marginalized. Yet somehow, this visionary and courageous generation built and sustained the world's largest and most remarkable system of private schools, surrounding their children – their greatest treasures – with an experience of community, faith, a drive for excellence, and a safe haven where they could pursue their dreams. 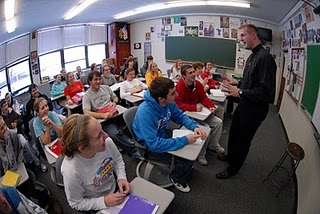 In Holy Cross, we recognize the value of this providential legacy. But we also recognize that our goal isn't just to keep the legacy alive – we're not interested in life support or, worse, hospice! Instead, we need to bring this vision of hope boldly into the 21st century. And we need courageous witnesses to continue to take up the challenge – men like the Holy Cross pastors, priests, seminarians, and lay collaborators that you will hear from on this blog throughout Catholic Schools Week.

The central educational problem our Catholic Schools face today is captured by a dynamic that can best be summarized in three statements of fact. First: poor kids are in deep trouble. Second: there is an intervention that works. And finally: this intervention is not reaching the kids that need it. 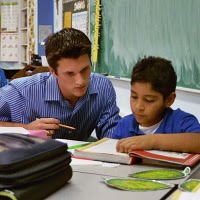 First: Poor kids are in deep trouble. The most disturbing problem we face today is the gap in achievement between poor and minority children and everyone else. The stats on achievement reveal a grave injustice, which we see clearly in the circumstances of our nation's most recently arrived—and largest—immigrant group, Latino families. While many call it an achievement gap, it's really an opportunity gap. Many of these kids are assigned to schools that doom them to lives of poverty.

Catholic Schools Work
Decades of research tell us that no system of schools – charter, private, or public – has demonstrated such proven effectiveness for the children most vulnerable to unsatisfactory schooling as Catholic schools. There is no other educational intervention with a track record like ours. We know that children who attend our schools are 42% more likely to graduate from high school, and 250% more likely to graduate from college.

We know that the achievement gap among Black and Hispanic 12th graders is typically reduced or even closed when these students attend Catholic schools. We know that Catholic school graduates are likely to earn higher wages than their public school peers, more likely to vote, more civically engaged, and more committed to service when they are adults. But … 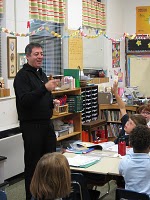 This Intervention Is Not Reaching Most Kids Who Need It
Why, for example, do only 3% of United States school-age Hispanic children attend Catholic schools, when the research has demonstrated convincingly that Catholic schools are especially effective at closing the achievement gap of minority students? From the disappearance of Catholic schools in urban areas, to financial barriers, both real and perceived, to the need for pastors who will make the courageous decisions needed to run and support an excellent school, the obstacles for poor families to send their children to affordable Catholic schools are real. But, as our ancestors in the faith and predecessors in Holy Cross have demonstrated, these obstacles are surmountable with the gifts of hope, hard work, creativity, prayer, and dedication. 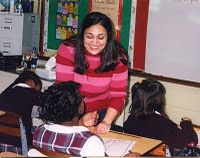 The challenges stared down by past generations must serve as inspiration and a prophetic call that Catholic schools can continue to thrive in their mission to bring an excellent, faith-filled education to all who seek it, including the poorest among us. True to the charism of Holy Cross, signs of hope are present in abundance, though none are available without great effort and single-minded dedication, inspired and sealed by the grace of the Spirit. You will see many of signs and pathways to hope in this blog this week. The Congregation of Holy Cross, especially in our K-12 schools and in our universities' commitment to providing continued talent and leadership for Catholic schools, remain "men with hope to bring" as we confront the challenges of the 21st century.