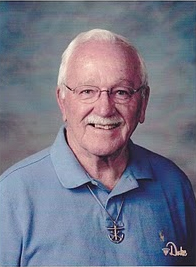 Here is the fourth in our on-going series of personal reflections from Holy Cross religious on what Blessed Brother André, who will be canonized October 17, means to them. This week's comes from Brother Ron Whelan, C.S.C.:

I first heard of Brother André Bessette as a young Holy Cross Brother when I was with my mother in a nursing home in Ottawa, Canada. The doctors said she had only a day or two to live. The religious sisters had placed a picture and a relic of Brother André on her pillow.

Even then, some sixty years ago, he was known as the Miracle Worker of Montreal. My mother said maybe Brother André could work another miracle and get my older brother, Fr. Gerald Whelan, CSC – who was a Holy Cross Priest in Santiago, Chile – home before she died. To everyone's amazement, Fr. Gerald the next day walked into mother's room totally unexpected. I like to think it was another one of Brother André's miracles. Mother went to heaven that afternoon.
From that day on I have had a special devotion to Brother André. For several years I directed André House of Hospitality in Oakland, California, a center for the homeless. Often during my years at André House when we were blessed with much, I said, "Well, it's another Brother André miracle."
I find it a great personal gift that October 17, the day on which our Holy Father, Pope Benedict XVI, will declare Blessed Brother André a saint of the universal Church, also happens to be my birthday! From then on the good Brother will become my favorite saint. My fervent prayer is that Brother André Bessette will always keep in his prayers the Congregation of Holy Cross which took him as a Holy Cross Brother in poor health and with little or no education.