Christmas Reflections from our Holy Founder

Christmas Reflections from our Holy Founder

From a Sermon on the Virtues of St. Joseph

St. Joseph practiced obedience also in the most perfect manner. While he was enjoying at Nazareth the delights of the most sacred union ever contracted and was practicing all the virtues of the hidden life, Heaven heaped on him the worst trials to which the human will can submit. Let us note the dolorous events that came upon his heart as father and spouse. To carry out the command of the Emperor Augustus concerning the numbering of his subjects, St. Joseph was obliged to go to Bethlehem, traveling the thirty leagues probably on foot in the most inclement season of the year, it being December, and crossing steep mountains and all this when his Virgin Spouse was ready to give birth to her Child. When they finally arrived in the city they found all the inns closed against them. The only refuge they could find in the city their ancestors had governed was a cave, which had been hollowed in the rock to serve as a shelter for the flocks. Here began new sufferings for the Holy Family, and especially for St. Joseph who had the care of Jesus and Mary. Did he let himself complain or even be distressed? Assuredly not. Rather, he makes us admire his resignation to the ruling of Providence and his obedience to every trial God asked of him. 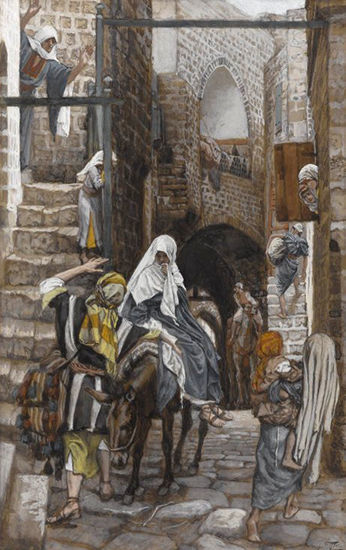 Scarcely had the Holy Family settled again in their home when an angel appeared to St. Joseph in a dream to bid him: "Arise and take the Child and His Mother, and fly into Egypt; and be there until I shall tell thee. For it will come to pass that Herod will seek the Child to destroy Him" (Matt. 2:13). That jealous and angry prince, having seen the Magi come from the Orient to adore at the crib of the new-born King, and being fearful for his throne, ordered the massacre of the Innocents. It might well have seemed strange and even bewildering to St. Joseph to be ordered to take such a flight. He might well have asked why the Son of the Most High was obliged to flee before a man and such a man. He might well have questioned why he must go into a distant and unknown country, expose a frail infant to the weariness and perils of such a difficult journey, why he must set forth during the very night when he received the order, without preparation and provisions, why he must take refuge among a people who were idolatrous, and avowedly unfriendly to the Jews, and live there till it pleased Providence to have him return, with no word at all from the angel as to the duration of the exile. These were questions that would naturally arise in such circumstances, at least in the minds of most of us. Could religious obedience offer a more difficult trial? Yet, without a word from Joseph, Mary, or Jesus, the Holy Family obeys.

Bear in mind and do not forget, reverend Fathers and dear Brothers, that just as Divine Providence has willed its greatest works to begin in humility and abjection, it has also decreed that they should expand only at the price of difficulties and contradictions, crosses, contempt, calumny, and detraction. Its purpose in so decreeing is that the first materials of these spiritual edifices may be tried as gold in the fire.

Is not this the eloquent lesson of the touching mystery of Bethlehem, which we are now celebrating? What is the message of this stable, this crib, these swaddling clothes, and these poor shepherds? Did not persecution greet this infant God when He came into the world which He was to save by dying on the cross covered with disgrace? Did not His apostles, too, drink of the bitter chalice of His passion? And was not the fruit of all this suffering, the foundation of the church and the conversion of the gentiles? 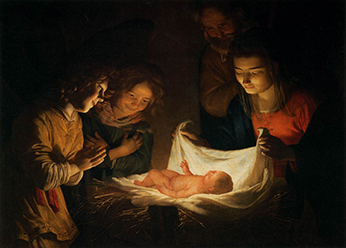 Consequently, although the trials undergone by the Congregation of Holy Cross have been numerous and cruel, yet, far from breaking or uprooting this growing plant, they should, on the contrary, strengthen and fortify it, make it fruitful, and at the same time purify the virtue of those who do not allow themselves to lose heart, and increase their knowledge of God. Hence we must have the hope that we shall happily complete our course under the auspices of the church which has deigned to approve our undertaking, and which has just accorded us, in the decrees with which you are already familiar, a new proof of its solicitude for us.

Both of these excerpts were taken from Basil Moreau Essential Writings, available from Ave Maria Press.