The month of January in Monterrey proved to be full of activity. On January 20, we celebrated the feast of the founder of Holy Cross, Blessed Basil Moreau. The community had a nice celebration in the house of formation with the priests, seminarians and sisters. One of the auxiliary bishops of Monterrey, Bishop Alfonso Miranda, came to the house to offer a Mass. Afterwards, we had a nice dinner with the bishop, enjoying food very typical for big occasions in Mexico, carne asada. It was a lively evening with all the Holy Cross community here: 19 in total. We were so grateful for the presence of the bishop, who was very gracious and took a lot of interest in getting to know the community. 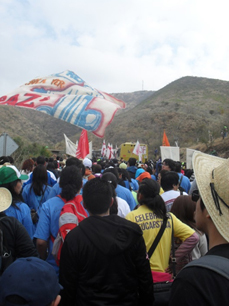 In the life of the parish, the major event this month was a trip with the youth groups to the state of Guanajuato in central Mexico. A large statue of Jesus stands on top of the mountain called "Cubilete." The location of this statue is the exact geographic center of the country. It is a powerful witness that at the heart of Mexico is Christ. Every year, youth from all over Mexico congregate in this place to climb the mountain and offer prayers and supplications for the youth of Mexico. Forty-two youth from our parish attended and about 15,000 youth from all parts of Mexico were there climbing together. The day began with adoration of the Blessed Sacrament at 5 a.m. at the base of the mountain, followed by a Mass offered by the papal nuncio of Mexico. At the completion of the Mass, everyone began to climb. It was really neat to see so many youth climbing together, singing songs, praying rosaries and getting to know other youth from other parts of Mexico. We took about 6 hours to get to the top to enjoy the statue of Jesus, and we had an opportunity to pray in front of the Blessed Sacrament in an adoration chapel that was also at the top.

Fortunately for us, buses were able to drive up the mountain also, so we were able to ride down (a blessing for us all because our legs and feet were ready to fall off!). Before heading back to Monterrey, we made a stop in the colonial city of Guanajuato. It is a beautiful city with many beautiful buildings, churches and plazas. I felt like I had walked back in time! This city was very influential in the war against Spain for the independence of Mexico in the 19th century, and it was interesting to learn much of this history during our visit. Overall, I really enjoyed the experience and was grateful for the opportunity to witness the faith of the youth here in Mexico. The Church of the future here in Mexico is in good hands with the faithfulness and resolve of the youth.

After returning from this trip, I immediately entered into preparations for Confirmations in the parish. This year we had 270 kids being confirmed, and so we were busy with the planning and preparations. With this number of kids, we were not able to confirm everyone at one Mass. Instead we had confirmations on three consecutive Sundays, with about 90 kids receiving confirmation at each one. The kids here in Mexico receive confirmation between the ages of eight and ten, after their second year of religious education classes. The Masses took place in our parish with the episcopal vicar presiding and administering the confirmations. Confirmation is a big deal for the families here, and the church was full with family and friends of the kids being confirmed. There was a tangible excitement from the kids, who felt ready to receive the sacrament. After the Masses of Confirmation, there were many parties and celebrations in the kids' homes to celebrate this major moment in their faith lives. With the reception of Confirmation, the kids are able to begin ministering in the Church; the most notable ministry being altar server (a favorite among the kids here). In May, these same kids will celebrate their first communion to complete their initiation in the Church. It was great to be part of these celebrations here and see the seriousness, and excitement, that surrounds this sacrament of the Church.

Mr. Ryan Pietrocarlo, C.S.C. is completing a pastoral year as a seminarian for the Congregation of Holy Cross. He is currently assigned to Nuestra Madre Santisima de La Luz in Monterrey, Mexico. Ryan and his fellow seminarians post twice each month to the Spes Unica Blog. Ryan graduated from Notre Dame with a degree in biochemistry prior to joining the Holy Cross formation program. He is from East Rochester, New York.