I made the phone call when I was 18 years old, and I was late. On the other end of the phone was a woman named Janis, the Director of Religious education at St. Charles Borromeo Parish in Bloomington, Indiana. There was a great chasm in the silence that followed her innocuous greeting, "Hello, this is Janis" I could leap across this chasm or stay on my own side. I leaped.

"Yes, Hello, my name is Michael Thomas, and I was wondering if I could, um, join R.C.I.A. at the parish." I rushed the last part of the sentence.

"Well sure, but you're lucky we're already two weeks in and today is the very last day we would have accepted anyone"

Now it was real I was really going to do this. I felt a surge of relief, gratitude, and panic. That Thursday I walked to the church, to the halogen lights, coffee urns, and collapsible tables that decorate most parish meeting spaces. It was there that I found over a dozen others: undergraduates like me, a couple in their late 70's, and everyone in between, men and women who still weren't quite sure what all of this could mean, why we were all here. We all wanted to become Catholic, and all for different reasons, with different stories. Some of us, it turned out, were scared, others were excited; some of us knew how to pray a Hail Mary in three languages, others had never even heard of the prayer.

We had classes, we prayed together, had a retreat together, and the whole time I was more and more sure that I had to be Catholic. I was enchanted by how the Church's doctrine hung together in dazzling coherence: Christology, anthropology, morality, sacramental theology were all woven together. The beauty of liturgy, the stability and comfort of ritual grabbed my imagination and urged me on. But I suffered because of this decision. 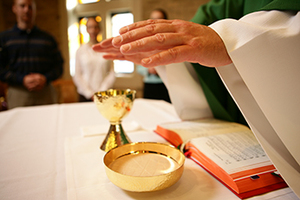 I was convinced that the Eucharist was really the Body and the Blood of Jesus. And I longed for it. In the midst of this longing, I also yearned for things to be the same between my parents and me. This would happen later, and in fact, our relationship would be transfigured and elevated beyond even what it was before. But this was impossible for me to see at the time.

As part of the R.C.I.A. process, my first Confession was in February of 2009. It was liberating, embarrassing, and hilarious. In preparation for the Sacrament, I wrote a list of all of my sins, but in a code that I made up in case I lost the paper (and someone would see!) I rendered something like "anger" into "AR." I was so nervous that I completely forgot what I had meant by my obscure abbreviations. This nervousness also caused me to lose my wits when I walked into the room. Rather than kneel at the temporary screen that had been set up, I sat down on the floor behind the screen (right on top of the knee rest), and, turning my torso to the right, spoke into the screen with my chin at the level of the penitent's elbow rest. Halfway through confessing my sins, my brain switched back on and I realized that I was sitting on the floor with my legs spread absurdly across the carpet. I was mortified, and heaved myself upright, rocking the movable screen violently as I adjusted, apologizing vehemently. The priest was gracious, assuring me that I was free to sit however I would like, and that I was doing a great job.

In April came the Easter Vigil Mass the night where I was to be Confirmed and have First Communion (I was already Baptized). And my life would never be the same.

When I remember that late night Communion at the end of an exhausting and beautiful liturgy, I am grateful and still in disbelief. I am thankful for and stunned by that moment of Communion with God the sheer love of the act, God's desire to be one with me and me with Him after all of those years of life before as a baptized person.

But it was the Eucharist that transformed my life in the years to come in ways that I would never have guessed. That summer and for the following summers of my undergraduate years, God lead me to a Catholic Worker, where I met undergraduate seminarians with the Congregation of Holy Cross with whom I became great friends. Through them I encountered the religious family of Holy Cross and began to discern my own future. 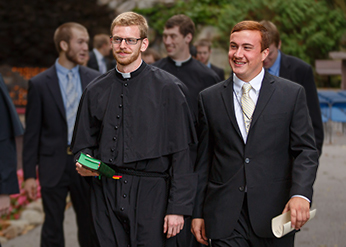 Now I am in my first year of vows with the Congregation of Holy Cross, moving toward (if it is God's will) the priesthood. My years in full communion with the Church have been a rich adventure, an unfolding of the realization of God's particular care for each one of His creatures, including me.

Sometimes I wonder at the marvel of it all: I grew up a Protestant kid just a few miles from Notre Dame (a place with which my family has no formal connection), and now I am a Roman Catholic, a vowed religious, and a seminarian.

R.C.I.A. helped me to respond to the action of God gently pulling me to himself, bringing me out of myself, and inviting me to share in His life so that I can give my own away. The months spent in R.C.I.A. began to move my religious conviction from the head to the heart from assent to an idea, to assent, in love, to the person of Jesus. It changed my life forever.

Michael Thomas, C.S.C., made his First Vows in August 2014, after completing his Novitiate year in Cascade, Colorado. He now resides at Moreau Seminary where he lives in community with other CSC seminarians, and priests of the Congregation of Holy Cross. Michael is originally from Lakeville, Indiana.