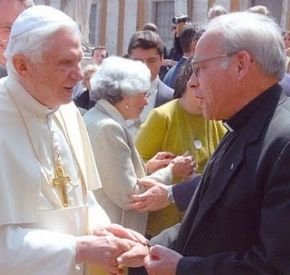 nother one of our Holy Cross priests from Family Theater Productions is making the news. Fr. Wilfred "Willy" Raymond, who is actually the Director of Family Theater Productions in Hollywood, is also giving his time as a chaplain to the Los Angeles Dodgers. As the article relates, Fr. Willy got involved with the Dodgers more out of a passion for the Sacraments, than out of a passion for baseball.

He has only been to one game this year, but he says Mass for the team every Saturday they are in town. Among his congregants are Joe Torre, Andre Either, and Juan Pierre. His ministry with the Dodgers is part of Fr. Willy's larger work to provide for the spiritual and Sacramental needs of Catholic pro-athletes through Catholic Athletes for Christ. We might not all be Dodgers fans, but at least we can all cheer for Christ!

The photo above of Fr. Willy comes from his recent visit to Rome. He was in Italy as part of screenings of several of the films from the Angelus Student Film Festival, which was begun by Family Theater Productions in 1996 "to showcase and award emerging filmmakers and encourage them to continue creating visionary projects that honor the fundamental dignity of the human person." After the screening, Fr. Willy was invited by the Focolare movement, which is frequent collaborator with Family Theater Productions, to meet the Holy Father. When he told the Holy Father of his ministry, the pope responded, "Ah, Hollywood, that's very important work!