Diary of a Mountain Priest: My Brother, Andre

Diary of a Mountain Priest: My Brother, Andre 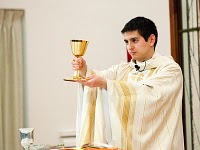 Today we have the latest post from Fr. Vince Kuna, C.S.C., who is at our parish in Colorado Springs. Like most of us in Holy Cross, his life and ministry this past month have really been enlivened by Saint André, so in his post today, Fr. Vince shares his homily from the Sunday before the canonization. Enjoy.

When we hear of miraculous stories, we might be tempted to think that at the time people didn't know of the rational explanation for the phenomenon. Or when we hear about miracles in the gospel, we do believe them, but relegate such miracles only to the power of Christ as we easily attribute miracles to Jesus, which are well within his divine power. But no one else has ever truly affected physical miracles have they? (Certainly not in modern times.) To convince you that miracles do happen even in our modern world and that ordinary people can affect them, let me tell you a true story. I've never told it to anyone until now.

The story was told to me by my elderly relatives and is about my older brother. He died many years ago, long before I was born. My brother, André, grew up in French Canada in a rural area. The people at the time were very poor, susceptible to illness and death. His parents were no exception to this rule; they passed away when he was young. So he was orphaned at a young age, and his living situation changed with frequency. Young children would tease him when he was young because of his tiny stature. Later in his schooling years he was of no particular brilliance. What could he do? In a culture that prided itself on physical strength, intellect and family lineage, what to do with a frail boy with little brains who came from nothing. Well, my family took a chance, they adopted and received André into our family. He would do something good, we thought.

Flashback to today's Scriptural readings we hear of the weak persons of the ancient world. Leprosy was a skin condition that ostracized a person from the community. Those afflicted with it would wear bells around themselves to announce their presence. People would scatter so as to not communicate the skin disease. Lepers were looked upon as useless and to be avoided. What could they possibly offer the world? In the Book of Kings reading, Naaman, himself a leper takes a plunge in the River Jordan at the command of the prophet Elisha, and he is cleansed of his disease. More important than the actual cleansing was that Naaman turned his past suffering and cleansing into an experience of God. That he returned to his retinue and told the story of his received miracle. A miracle that alleviated past suffering and turned it into an experience of God which elevated the faith of those around Naaman. 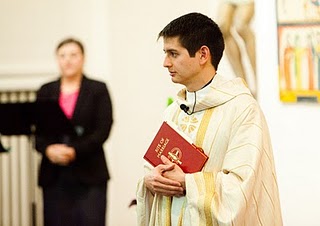 In the Gospel, too, we see Jesus Christ affecting miracles. He's working as many as ten miracles in this Gospel, but his success in increasing the faith of those healed is measured. Only one out of the ten shows gratitude by returning to Jesus to thank him and show him his restored faith. The other nine seem to miss the point. To be physically healed is certainly wondrous, but to not take that physical healing and transform it into a spiritual experience of increasing one's faith and the faith of others around you is to miss the point.

Let's return to the story of my brother André. My family finally decided where to send him in his adult age. He wasn't quite intelligent enough to matriculate to university studies. His slight stature didn't qualify him for hard manual labor. But he was a good and holy young man. My family decided to send him to Montreal where he could serve as a doorman at a very modest Catholic chapel. Well, not only did people flock to see him to learn something about the spiritual life, but they found out that he had been graced with divine healing powers. André was one of the few Catholics in the history of the Church that God bestowed the same spiritual charism of healing that graced our Lord Jesus Christ. Cripples and those afflicted with various diseases would come to him for healing and often times their conditions would be miraculously reversed. There would be no medical explanation. Even some of the most hardened atheist doctors were converted to the Catholic faith.

So André would heal, but knowing his gospels well, he knew the role of miracles was to increase the faith of the recipient. André told them to pray to St. Joseph as he brings all of us closer to his foster son, Jesus Christ. St. Joseph was a special devotion of his, as André an orphan in his own right, a permanent foster child of my family so to speak. Today, that modest Catholic chapel has grown into a massive Oratory dedicated to St. Joseph which continues to animate the faith of French-Canadian Catholics to this day.

In a modern age, when people are skeptical of miracles, maybe even skeptical of the Gospels written thousands of years ago, God sent us André Bessette to restore our faith. That a good-for-nothing, frail boy could affect miracles and increase our faith. That in the last century, Andre Bessette was proof: Cripples walk, lepers are cured, dead men are raised to life, and the poor have the good news preached to them.