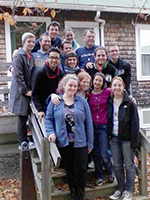 Last weekend, Deacon Tim Mouton, C.S.C., and I went on the fall Christ Encounters Retreat with about 40 students from Stonehill College. Tim and I found ourselves suddenly in charge of the retreat after an illness sidelined the Holy Cross priest on the Campus Ministry team who normally takes charge of the retreats. For various reasons, neither Tim nor I had ever been on a Campus Ministry retreat, neither when we were students at Notre Dame nor as adult leaders. It was a bit of a daunting challenge to have to pull the retreat together in only a few weeks.

Fortunately, there were two excellent student coordinators who had put together a team of students to lead the retreat. These student leaders had all been on the retreat before and knew exactly what needed to be done. So we worked with them as they prepared their talks, and Tim and I managed all of the practical details of the retreat like food, housing, transportation etc. After a lot of late night meetings, we were ready to go.

At the first session of the retreat, everyone introduced themselves and said one "fun" fact about themselves. I said that I was Hungarian and my name Szakaly means "beard" in that language. Everyone laughed at that. Then a bit later Tim introduced himself and said that his fun fact was that I had held him in my arms when he was one month old. Tim's uncle Jeffrey, who was my novice classmate, just happened to be assigned for our January placement to Tim's hometown. Jeffrey wanted to see his new nephew so I went with him to visit. Thus I met Tim at that early age! All the students on the retreat got a laugh out of that.

The retreat continued with very moving talks about how the student leaders had encountered Christ in their lives. There were many opportunities for prayer, quiet reflection, small group discussions, confessions, the Eucharist and of course some activities just for fun.

One of those fun activities was skit night. Each of the small groups was given a scripture passage and they were to use it to come up with a skit relevant to life at Stonehill. One of the groups asked if Tim and I would be willing to be in their skit. The scripture passage for the skit was the Nativity of Jesus. We agreed and the next thing you know I was dressed up as a shepherd with this ridiculous fake beard and Tim was wrapped in tons of blankets as the infant Jesus. At the end of the skit I came out with the three kings and stated that I was shepherd Beard and that I was here to see the baby. Then I asked if I could hold the child. As I knelt down to pick Tim up I said, "Boy, they sure grow them big around here" and then I said "I've got a feeling I've done this before." Well, the place was up for grabs, with the students howling in laughter. 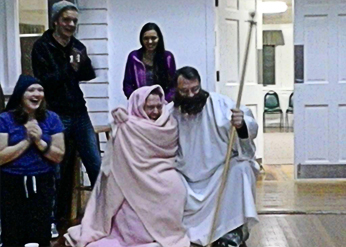 The retreat was a wonderful experience for me. It was a true joy to hear the faith stories of the leaders, to hear hours of confessions and to just join in wonderful conversations with the students. And it was a special privilege for Tim and me to share a little bit of the joy of our Holy Cross brotherhood with the retreatants.

Fr. Tony Szakaly, C.S.C. is the local superior of the Holy Cross community at Stonehill College, and previously served as an assistant provincial for the United States Province of Priests and Brothers. A South Bend native, he received a Holy Cross education at every level of his schooling, from the C.S.C. sisters in grade school, the C.S.C. brothers in high school and C.S.C. priests at the University of Notre Dame. He took final vows in 1991 and was ordained to the priesthood in 1992.