Besides the larger crowds, including the many cardinals and diplomats, there was not much else about the Angelus on Sunday or the Audience on Wednesday that screamed something truly historic, truly unprecedented was taking place. Both the Angelus and the Audience stuck to their basic scripts and lasted, more or less, their standard length. And afterwards, the crowds did not mill around much longer than any other week. 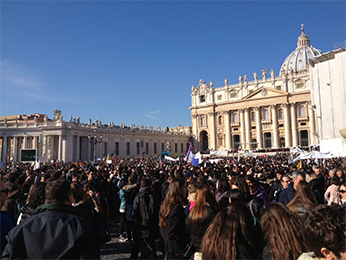 In a word, what was so extraordinary about the last two public events of Benedict XVI's pontificate was just how ordinary, in a sense, they both were. It was that ordinariness that gave them their great beauty.

It is not what many people had expected this week would look like when Pope Benedict XVI did the unexpected and resigned. Many expected big ceremonies and celebrations – perhaps even a large send-off Mass – to say thank you and goodbye to the Holy Father. And yet, there really has not been much of that. At least in that regard, it has been life as usual at the Vatican and in Rome these past weeks.

The rest of us thought it was about the Pope or, more specifically, about Benedict XVI. And yet, in the way he has lived these past few weeks in office, Benedict XVI has reminded us in a humble, yet powerful way that it was not about him.

The historic, unprecedented events we have lived as a Church these past few weeks – as well as the historic and unprecedented events we will live now in the weeks to come – are really about something much greater than one man: the Church. Really, they are about someone much greater: Jesus Christ. In fact, one of the biggest applauses, if not the biggest, at today's Audience, came when the Pope said, "The barque of the Church is not mine, not ours, but His." 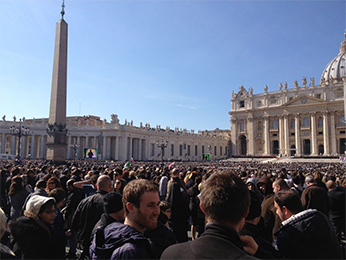 Even when the Pope reflected quite personally – and movingly – at today's final Audience on his experience of the Petrine ministry, he was not the center of his own reflection. Jesus Christ was at the center.

"I asked God with insistence in prayer to enlighten me with His light to make me take the right decision – not for my sake, but for the good of the Church," said the Holy Father. "I have taken this step in full awareness of its severity and also its novelty, but with a deep peace of mind. Loving the Church also means having the courage to make difficult, trying choices, having ever before oneself the good of the Church and not one's own." (Full text of the Audience)

And thus, we can say that Pope Benedict XVI – the consummate educator in the faith that he is – turned his farewell address into a moving catechesis on discipleship and ministry in the Church. With his words, yes, but more importantly with the way he has sought to serve the Church, especially in these last days, Pope Benedict XVI has humbly, yet courageously taught us what it means to come "to serve and not be served, and to give one's life for the ransom of many" (Mark 10:45).

Listening to the Holy Father today, it is hard not to remember Simeon in the Gospel of Luke. We are told he was "righteous and devout, awaiting the consolation of Israel, and the Holy Spirit was upon him" (Luke 2:26). In other words, he was a man who lived his life by asking, "Lord, what do you ask of me?"

Simeon had been promised that he "should not see death before he had seen the Messiah of the Lord" (2:26). Yet, one might wonder, when that Savior came in the form of a small, infant child whose parents were so poor they had to offer the more humble offering to the Lord for their son, if Simeon was not slightly taken aback by how human God's chosen instrument of salvation was. And yet, Simeon, through the eyes of a faith honed through years of surrender to God's will, was able to recognize in that little, weak, human child the fullness of the divine presence, love, and plan for our world.

Similarly, through his service as Prefect of the Congregation for the Doctrine of the Faith and then as Pope, Benedict XVI has had a unique insight into the utter humanity of the Roman Catholic Church. And yet, despite all he has seen and experienced, he, likewise through the eyes of a faith honed through years of surrender to God's will, is still able to see in the Church's humanity the fullness of the divine presence, love, and plan for our world.

And so, in many ways, the Holy Father seems to be echoing the words of Simeon as he nears the twilight of his own life (Luke 2:29-32):

"Now, Master, let your servant go in peace,
For you word has been fulfilled.
My own eyes have seen the salvation,
Which you have prepared in the sight of every people,
A light to reveal you to the Gentiles
And the glory of your people Israel."
Now, it is of course, our turn to follow where our shepherd has led: "Lord, what are you asking of us?" Through coming to serve and not be served, and through giving our lives for the ransom of many, may we be granted the same light and peace in our lives.