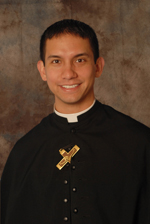 With the celebration of Lucernarium this evening at Moreau Seminary, the 2011 Final Vows Weekend for the United States Province officially began. Tomorrow at 2 p.m. ET in the Basilica of the Sacred Heart, Mr. Matt Kuczora, C.S.C., will be professing forever the vows of poverty, chastity and obedience according to the Constitutions of the Congregation of Holy Cross. The Final Vows liturgy will be streamed live on the Internet for all of those unable to attend the Mass in person. Then on Sunday at 10:30 a.m. ET in the Moreau Seminary Chapel, Matt will be ordained a deacon by the Most Rev. Kevin C. Rhoades, Bishop of the Diocese of Fort Wayne-South Bend. 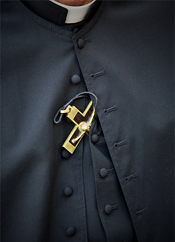 We consider good eyesight a blessing. It is a blessing to be able to see and see clearly. Not everyone has good eyesight and some people were born without eyesight or have lost it.Fr. Bob Dowd, C.S.C., Assistant Professor of Political Science at the University of Notre Dame, presided at Lucernarium this evening. As part of the prayer service, he blessed final profession cross that Matt will now wear as part of his Holy Cross habit. Fr. Bob knows Matt from St. Edward's Hall where he lives in residence and where Matt lived as an undergraduate at Notre Dame. Fr. Bob graciously shared with us here at Spes Unica the homily he preached tonight on the eve of Matt's final profession:

Of course, there is eyesight and there is insight. Not everyone who has eyesight has insight. In fact, eyesight is not necessary for insight. 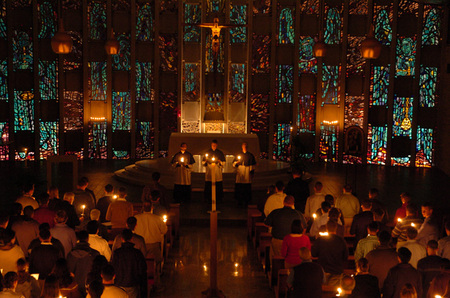 A few years ago, when I was in graduate school in Los Angeles, I met someone who lacked eyesight but was gifted with insight. Her name is Maria. You see, I took the city bus from the parish where I resided to the UCLA campus every day. Besides students like myself, who had a car but chose to take the bus because it was more convenient, there were many people who were taking the bus quite clearly because they had no choice. Some looked like they were homeless or on the verge of homelessness. Some of them were elderly people who were living on fixed incomes. Few people spoke to each other. Silence often reigned on the bus.
As relatively well-to-do people boarded the bus, they usually avoided sitting close to people who appeared a little strange or sick -- except for Maria. Maria would get on the bus and often sit down next to the people others avoided. Maria would strike up a conversation with them and ask them about their day. The people who she sat next to and with whom she struck up conversations would often begin to smile. Maria treated them with a respect with which they were rarely treated.

Maria encouraged people because she did not judge people by appearances. She could not because she was actually blind. (I hesitate to use the word "blind", because she seemed to see what matters the most much better than most of us!) Although I would imagine that Maria would have preferred to have eyesight, God seemed to turn her "handicap" into a gift and blessed her with insight. Her insight called those of us who witnessed the deep respect with which she treated people to recognize that there is more to life than what meets the eye.

In a world where we are often led to believe that 'what you see is what you get', Matt's decision to profess forever the vows of chastity, poverty, and obedience according to the Constitutions of the Congregation of Holy Cross indicates his belief that there is more to life than what meets the eye.
The vows of poverty, chastity and obedience that he will make forever not only represent his commitment to single-hearted dependency, intimacy, and reliance on God, but they also represent Matt's desire to live in freedom; freedom from everything that might prevent him from recognizing that God is present in all people, regardless of their appearance or state in life. 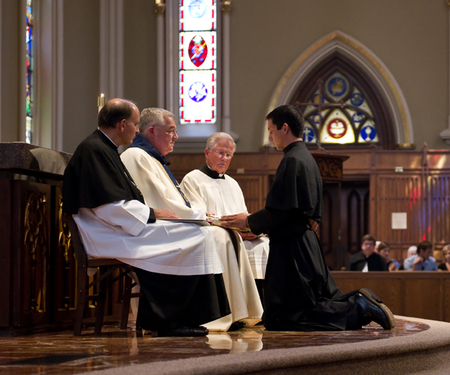