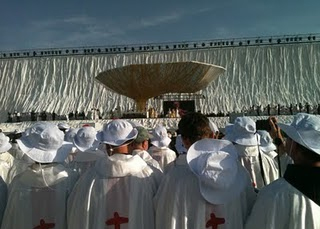 Back from World Youth Day in Madrid, Fr. Drew Gawrych, C.S.C., filed the following reflection on con-celebrating the closing Mass at Cautro Vientos with the Holy Father.

Although this was the fourth World Youth Day I have attended, it was my first as a priest. It was also my first chance to see Pope Benedict XVI in person as well as to con-celebrate Mass with the Successor of St. Peter – along with 800 bishops, 14,000 priests, and over 1.5 million of my brothers and sisters in Christ. (For those counting at home, Madrid was the third largest World Youth Day ever, behind only Manila in 1995 and Rome in 2000.)


Fr. Gerry Olinger, C.S.C., who was leading a group of pilgrims from the University of Portland, and I went at 4 a.m. to enter the section for con-celebrants at the closing liturgy. We were able to stake out seats in the fourth row of concelebrants, right behind the dignitaries in front of the main altar. They were great seats from which to pray and participate in the Mass, but it also meant we had over five hours to wait until Mass started. 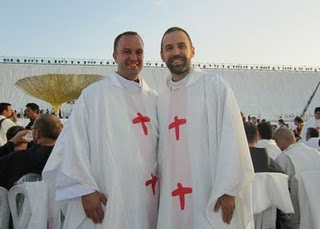 Those five plus hours passed fairly quickly as there was great fellowship shared among the priests. Fr. Gerry and I sat by five priests from the Diocese of Toledo in Spain, who entertained us with their running commentary of events leading up to the Mass, including charitably poking fun at a few of the priests who decided to vest at 5 a.m. with still over four hours to go until the Pope's arrival. They also, though, edified us by praying Lauds together as the sun rose and then reverently and prayerfully entering into the Mass. (Let the record show that Fr. Gerry and I also prayed Lauds together and entered the Mass reverently and prayerfully!)
In case you were wondering, we priests – and, let me add, our beloved successors to the apostles, the bishops – were definitely stirred into pandemonium with the arrival of Pope Benedict XVI to Cautro Vientos. We were all craning, trying to get the best glimpse and picture of the Holy Father. We also waved enthusiastically as he stepped forward to greet us after the end of the Mass. 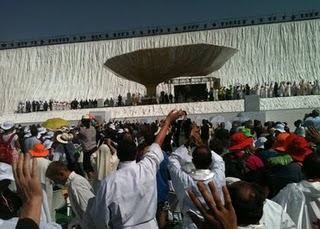 I must confess, though, that the fact that I had just con-celebrated Mass with the Successor of St. Peter did not really hit me until I got back home to where we were staying – and had a good three hour nap after sleeping less than an hour during the night of the Vigil. I woke up, certainly not rested, but with an overwhelming gratitude for my vocation as a priest. All I wanted to do – and all I did for the next hour – was pray in thanksgiving and praise of God for the opportunity to serve Him as a priest.
Like all truly meaningful things in life, I cannot really explain it. But one of the refrains of Pope Benedict XVI during this World Youth Day was calling upon the youth to be willing to suffer on behalf of Christ and His Gospel. It was not the message I expected from the Pope – then again, I do not know what message I was expecting – but what a powerful and profound message from our Holy Father!
The Pope's call to suffer on behalf of the Gospel really resonated with me because more than any other World Youth Day I can remember – and I have also attended the ones in Paris (1997), Rome (2000), and Toronto (2002) – Madrid manifested the growing contrast between the vision of our world and the vision of the Gospel. That contrast came into relief in large part through the protest that took place on Wednesday, August 17, with the permission of the Spanish government (and that unfortunately turned a bit nasty toward the end).
In response to the protestors who were hurling insults at the Church and at the Holy Father, including calling him a "Nazi" and a "pederast" and warning people to protect their children, the WYD pilgrims chanted what became the signature cheer of this WYD: Nosotros somos la juventud del Papa. "We are the youth of the Pope."

It was that same cheer that broke out spontaneously among the pilgrims the night of the Vigil when the storm came tearing through Cuatro Vientos with fierce winds and heavy rains. I instantly joined in, but I was also chuckling to myself a bit at how crazy we must look to the rest of the world, huddled under our trash bags and blow-up rafts trying to protect ourselves from the storm while chanting, "We are the youth of the Pope." Quickly, however, my thoughts turned to the first disciples, huddled in a boat in the midst of their own storm, who turned to Christ to calm the winds and the rains and guide them. 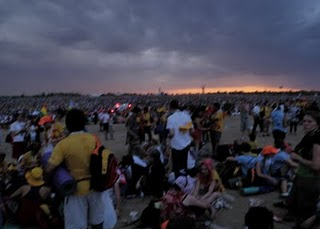 Certainly, there are no shortage of storms brewing and winds whipping up against the Gospel today. But as Catholics, and especially as young Catholics, we look to Christ's Vicar to help calm the storms and guide us through this life. And that is exactly what Pope Benedict XVI did for us at WYD.

With his words of encouragement, his unwavering faith, and his clear teaching, he calmed the storms of our hearts and plotted the course forward for us – one rooted in a vibrant personal relationship with Christ and anchored in the life and teaching of the Church. Like the man he was chosen by the Holy Spirit to represent, Pope Benedict XVI reminded us young people that it is through the cross, through bearing suffering in love for others, that we and others will find the gift of true life and salvation. 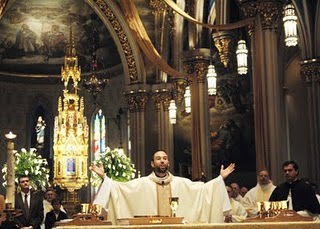 Yet this Sunday, after having con-celebrated Mass with the Holy Father and having heard his clarion call to lay down my life for the sake of Christ and His gospel, I find myself – to borrow from the theme of this WYD – planted and built up anew in Jesus Christ, firmer in the faith … and firmer in the priesthood.And that is what brings me back to the priesthood. One of the things I love most, if not the most, about being a priest is how it not only allows me, but demands me to lay down my life in love of others. As much as I long to be holy and to serve the Lord with all my heart and soul and being, I find – as our Holy Cross Constitutions state – that I still have it within myself to hold back. I wish to be wholehearted, yet I can be hesitant (1:8).