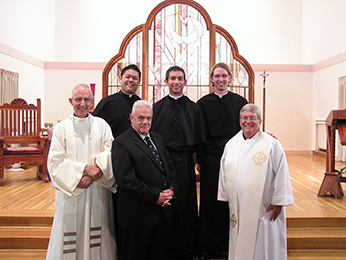 "We loved our novice master," he said with a jovial smile and a wink. I couldn't quite comprehend what Fr. Tom Lemos, C.S.C., was implying. I was a month into my time as a "novice" (religious speak for "naïve amateur in the ways of God"), and I was trying to figure out if my "novice master" ("master of my religious formation" or "the guy the Pope couldn't even interfere with") was trying to say: "I should love him or ELSE!" Or if he was just being sarcastic with regards to his own religious formation. He then related this story.

Fr. Tom's novice master was truly well-beloved by his novices; they had taken a great deal of his advice to heart. And so when the time came for them to take Final Vows, they all wholeheartedly agreed to include him in the festivities. However, much to the dismay of all, they were told by their religious superiors that their beloved novice master had left the order and the priesthood and run off with a nurse. In an ironic twist of fate, the novices quickly recalled a stern warning from their novice master: "Beware of nurses!" 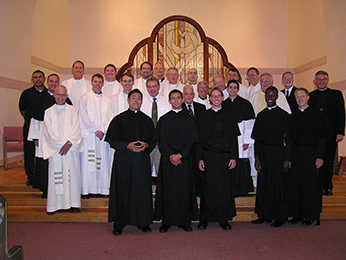 Quite unlike his own novice master, Fr. Tom, did not so much give me or my fellow classmates stern warnings, he never warned us about nurses. I, however, have taken a great deal of what he said to heart. He said, "The most important thing you can do as a parish priest is visit the sick and dying." Even though Fr. Tom was no longer a parish priest, he continued to see the sick and dying at the nearby parish, Sacred Heart in Colorado Springs, where he had served previously as a pastor.

Truth be known, Fr. Tom hated being a novice master. He was away from the people he cared dearly about, the people of the various parishes he had served. It wasn't particular families; it was all of them. He could tell you about this family and that family – how they were doing now and how they were the day he left. It became clear to me that his true joy in life came from serving the people of God.

I must say, he never resented having to form us novices. I know he cared for us too, but he had been formed, changed in such a way – maybe less by his own novice master, most likely by God – to serve God's people, especially those most in need.

As a young priest, Fr. Tom's advice looms large in my mind, especially the people it calls me to serve. There are times that I am called away to hospitals and homes, to hear final confessions, to anoint, to give that last meal, Holy Communion. I meet new families and invite them to our parish; I get reacquainted with older families, reaffirming our bond to them. At their greatest time of need, we their priests are there for them.

Fr. Tom spoke not of fear, not of warnings; it seems that all becomes a self-fulfilling prophecy. Fr. Tom spoke of courage, of action from the heart. Maybe that too is a prophecy.

Fr. Paul Ybarra, C.S.C., is the Parochial Vicar at St. John Vianney Parish in Goodyear, Ariz. Fr. Ybarra was professed Final Vows in the Congregation of Holy Cross on August 28, 2010 and was ordained April 30, 2011! He joins the Spes Unica Blog this year as a regular contributor, sharing with us a slice of parish ministry in the Holy Cross. Learn more about the work of Holy Cross in parochial ministry, including a video highlighting the 13 parishes Holy Cross officially sponsors in the United States.